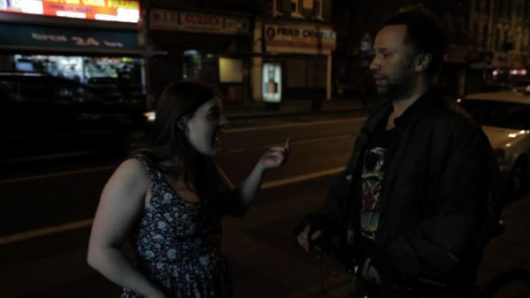 The Wanderer (Bunker) takes place in an underground bunker, reminiscent of the cold war era, where the characters and their surrounding environment are literally turned upside down. With a heightened sense of awareness and a constantly ringing telephone, the characters converse in a faux military dialogue. Their objective is to locate Gregor, the film’s elusive protagonist. Between fragmented exchanges and tangled mappings the characters are lost in an over-communicative mix of past and present, reality and falsehood. This is the fifth part of her ongoing project, The Wanderer, made up of a full-length feature film and seven gallery installations. The film exists as a seven part sequence that has been developed from an intuitive German to English translation based on ‘The Wanderer by Franz Kafka’ authored by Rory MacBeth. Between the two languages the original narrative becomes transformed, if not lost, in its translation. Throughout The Wanderer Prouvost’s protagonists, undergo a series of increasingly bizarre experiences, in which reality disintegrates around them. Combining everyday footage with staged interludes, the film’s plot is constantly undermined by the disparate audio and visual elements with which it is juxtaposed.