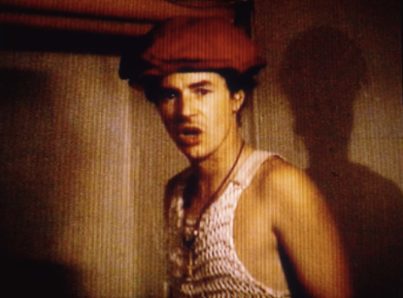 ‘The Way Out’ profiles Xentos “Fray Bentos” Jones, one of the founding members of The Homosexuals, a band that lapsed into obscurity after self-releasing a number of groundbreaking records in the post-punk period. Although The Homosexuals disbanded without ever releasing an authorised LP, L Voag (aka Xentos) released his own solo project, The Way Out, in 1979. The Way Out was a cut-up DIY concept album that imagined its musical context situated in an inverted parallel universe where pop music is made by Modernist, Serialist composers and the avant-garde is left to those on the fringes of acceptance. Amos (aka Xentos) continued to produce and distribute a mass of diverse tape projects throughout the 80’s on his own label, Its War Boys, spanning most known and unknown musical genres, under a myriad of multiple identities. THE WAY OUT interweaves new interviews, scripted scenes, found and filmed footage with unearthed Super 8 films by Xentos himself.