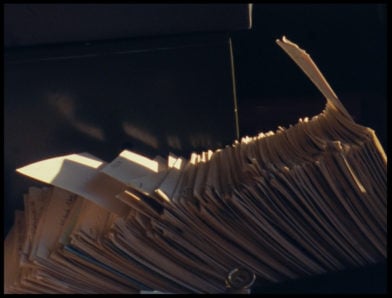 My mother is a Sociologist – she came to Glasgow from the south of England in the 60’s to work within the Politics Department of Glasgow University- after a few years the Sociologists broke away and formed their own department, where she taught until she retired. Although the university advocated and furnished her with her own personal computer – she still used index cards to make notes on the books and articles that she read. Now that she no longer has an office her house is filled with shoeboxes and filing cabinets containing these cards. My mother was absent on the day that I shot this film; the interview and sounds were recorded at a later date.