A Child’s Garden and the Serious Sea 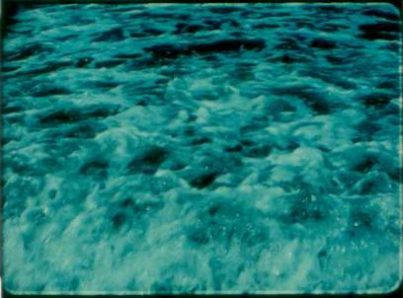 In poet Ronald Johnson’s great epic Ark, in the first book Foundations, the poem ‘Beam 29’ has this passage: ‘The seed is disseminated at the gated mosaic a hundred feet/ below, above/ long windrows of motion/ connecting dilated arches undergoing transamplification:/ ‘seen in the water so clear as christiall’/ (prairie tremblante)’ which breaks into musical notation that, ‘presto’, becomes a design of spatial tilts: This is where the film began, and I carried a xerox of the still unpublished ARC 50 through 66 all that trip with Marilyn and Anton around Vancouver Island. As I wrote him, ‘The pun ‘out on a limn’ kept ringing through my mind as I caught the hairs of side-light off ephemera of objects tangent to Marilyn’s childhood: She grew up in Victoria, and there I was in her childhood backyard…’: and then there was the Sea – not as a counter-balance but as hidden generator of it all, of the World to be discovered by the/any child…as poet Charles Olson has it: ‘Vast earth rejoices,/ deep swirling Okeanos steers all things through all things,/ everything issues from the one, the soul is led from drunkenness/ to dryness, the sleeper lights up from the dead,/ the man awake lights up from the sleeping.’ (Maximus, from ‘Dogtown – I’). – S.B.