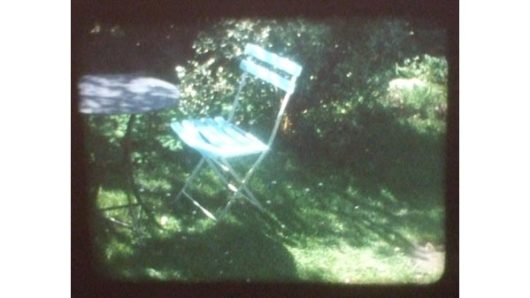 “At home, we saw, through the windows, and snow, and wind, and sun, and the garden, and flowers in a vase…” P.T.Editing, Anthea Kennedy and Peter Todd.‘In this film, director Peter Todd limits himself to filming his immediate surroundings: his street, his living room, and his yard in particular. The result is a wordless torrent of daily life, exposed to the willful character of the seasons. Intensely in bloom on a beautiful summer day, covered by a thick layer of snow in the winter. In this microcosmos, there’s always something to enjoy for those who have an eye for the rhythm of nature. The typical colors and the coarse graininess of 16mm film contribute to an atmosphere of nostalgia. Handheld shots are tightly edited together to create a film that jumps from one mini-tableau to another. Amazement at what is everyday and the mortality of it all; the seasons pass by and return again, but it’s always slightly different than the year before. And we sit by and watch, a year older as well.’IDFA (International Documentary Film Festival Amsterdam). 2009.