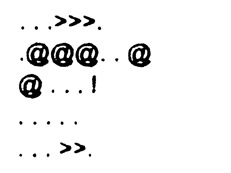 Taanila’s film is based on the live performance of the Symphony for 12 Dot Matrix Printers by the Canadian artist duo [The User]. The film intercuts close-ups of the mechanical parts of the printers performing the piece, taken from surveillance cameras placed inside the machines, with images of the ASCII files’ score being played, which has been photocopied straight onto clear film without the use of a camera. These live images are contrasted with time-lapse footage of large modern office blocks shot from the streets, at dawn and dusk, in Helsinki.
“Our senses are used to the grey noise of technology that floats among us all the time. [My film] focuses the attention of the spectator on the presence of technology. The film is critical of the ‘brilliance’ of technology; intentional mis-use of technology becomes art.” – M.T.