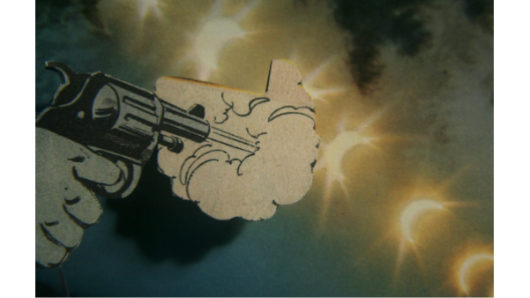 “In Greek mythology Lethe is the underworld river from which the dead drink to forget their life on earth. The first film in a possible trilogy of mythologically inspired pieces with female protagonists.”-L.K

“One of Klahr’s longest films, and one of his most straightforward narrative melodramas, Lethe conjures up the full emotional spectrum and storytelling potential of a film by Vincente Minnelli or Douglas Sirk, even though the only sets and actors are cut-out pieces of paper brought to life by Klahr’s imagination and storytelling abilities. Without sacrificing his signature forms of poetic abstraction and uncanny imagery, Klahr tells a tale ripped out of a pulp novel. An older scientist devises a way to win the love of a beautiful younger woman, and the film deals with the psychic fallout of this relationship rains on the woman.”

“It also functions as one of Klahr’s most sophisticated enactments of the intertwining of Thanatos and Eros, as if the inanimate materials that he is bringing back to life wish to return to their natural state of dead calm.”