Hang on a Minute 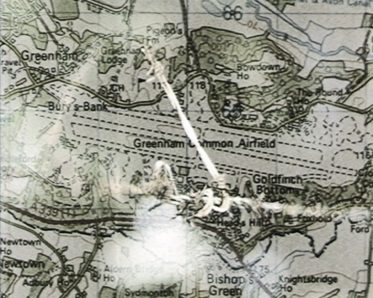 ‘Rhodes’s exploration of the televisual medium Goose and Common and No. 8 Bus are representative of Hang on a Minute, a series of thirteen one-minute films she made with Joanna Davis in 1983. Commissioned by Channel 4 to appear in between other programmes, Hang On a Minute addressed issues topical to the political landscape of the period – many of which are still urgent today, from Greenham Common to domestic violence – with formal ingenuity, wit and contained but steel-edged anger at injustice. Here language unrolls across the (television) screen in the form of statistics, newsprint, legal document, poetry, prose and hand-written words; it is spoken, sung and recited.’ –Lucy Reynolds ‘Afterall/Online’ : Lis Rhodes: Grammars of Looking and Grammars of Language 16 March 2012‘By 1983–85 and ‘Hang on a Minute’, a series of 13 one-minute films produced for Channel 4, Rhodes had moved from gender politics (which determined professional decisions such as her withdrawal from a Hayward exhibition in 1979 due to her being the only woman involved in the show) to global politics and political corruption. In one of these films, for instance, she explicitly joins the dots between the British government getting illegal uranium from a Namibian mine and the profits made by the multinational RTZ: ‘It feels a bit like everything’s free but not for me,’ says a singer on the soundtrack, summarising a rigged game that hasn’t changed for the better in a quarter-century. Another film, dilating outward from the women’s peace camp at RAF Greenham Common that was blockaded from 1982, looks forward to Rhodes’s consequent focus of attention: the concealment or removal of evident public dissatisfaction.’ –Martin Herbert, ‘frieze’ issue 146 April 2012  Thirteen 1 minute films which grew out of a series of short poems written by artist Lis Rhodes. The films reflect on the traditional patterns of oppression in women’s lives and the many forms that resistance takes. Made with the artist Jo Davis and commissioned by Channel 4, they were intended to be shown ‘in between’ programmes, unexpectedly and to be repeated several times during an evening, as adverts are shown. ‘Hang On A Minute’, February 2013 Commission as part of Glasgow Short Film FestivalFull series of Hang On A Minute available from Cinenova   ————————————————————————————————  COMPOSING FOR THE FILMS MANDY MERCK ASKS LINDSAY COOPER ABOUT SCORING THE INDEPENDENTS  LC I found myself mixing Dagmar (Krause) way into the foreground yesterday when I was doing some songs for the films that Lis Rhodes and Jo Davis are doing. I did real classic singer-right-in-the-front, instruments-at-the-back style mixing, which I think is a reaction to the problems that we’ve had. Certainly on film tracks you’ve got to foreground the voice.  MM So what’s this work with Lis Rhodes and Jo Davis?  LC They’re making a series of teeny-weeny films for Channel 4. One minute.  MM And how many of those are going to be shown in a given programme together?  LC I think the idea is to insert them in rather the manner of adverts between programmes Whether that actually happens remains to be seen, because as we know C4 is getting a little nervous these days. They are actually rather radical. I haven’t seen anything that Jo Davis has done before, but it’s within the sort of work that Lis Rhodes has done and it’s fairly uncompromising in the visual material, the way of presenting it and the content.  ————————————————————————————————  Selected Screenings : Installation in ‘Cross Currents’, 10 years of mixed media, Royal College of Art, London 1984 ; six of the ‘Hang on a Minute’ films, Channel 4 TV transmissions, 1985 ; Warsaw, November, 2002 ; ‘Hang on a Minute – ‘Goose & Common’ and ‘No. 8 Bus’ at no.w.here 19 October 2011; ‘No.8 Bus’ and ‘Goose & Common’ at The Institute of Contemporary Art, London, 25 January to 25 March 2012  Full series of Hang On A Minute available from Cinenova