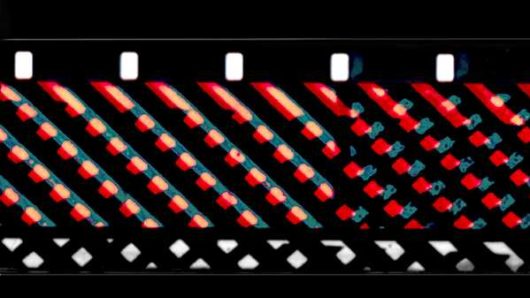 It was perhaps the question of sound – the uncertainty of any synchronicity between what was seen and what was said that began an investigation into the relationship of sound to image. Dresden Dynamo is a film that I made without a camera – in which the image is the sound track – the sound track the image. A film document. – L.R.

‘At the work’s core is an experimental approach to the stuff of film and a fiercely political outlook. Dresden Dynamo is an abstract assault on the senses. Eschewing a camera, Rhodes affixed patterned Letratone stickers to the film itself and used filters to create red and blue colours. Stripes, dots and wavy lines surge across the screen, and their forms dictate the accompanying barrage of white noise and atonal bleeps.’  – Ben Luke London Evening Standard 26 January 2012

‘This film is essentially about how images create their own sound by extending into that area of film which is ‘read’ by optical sound equipment. The final print has been achieved through three, separate, consecutive printings from the original material, on a contact printer. Colour was added, with filters, on the final run. The film is not a sequential piece. It does not develop crescendos. It creates the illusion of spatial depth from essentially, flat, graphic, raw material.’ – Tim Bruce. 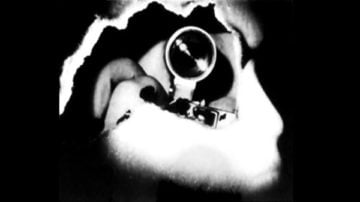