I was writing about colours and shapes but found myself wanting to write about improvisation. Specifically I wanted to think about what it’s like improvising with other people. I wanted to remember it: how it feels to keep music going, to pass it between bodies. I wanted to remember how it feels when something becomes the rhythm that wasn’t the rhythm before, how to not know when to stop playing the same small pattern over and over again, how to keep playing it until it’s transformed enough. How to sit on the floor with small instruments, get pins and needles, look up to see other players’ bent heads. There is this distance between you and them, and then it closes very fast, and then opens again. Ideas that felt small and naïve connect with someone else’s and tessellate and bloom. There is a sudden meeting, then a slower merging. This process – meet, merge – is often encountered in Katy Dove’s short animated films.

The earliest work here is Fantasy Freedom, from 1999, a 90-second animation made when Dove was a student at Duncan Jordanstone College of Art & Design in Dundee. The latest, dated 2013, is the four-minute Meaning in Action. In the time and space between these two films you see how a technique is developed and a vocabulary expands, how experiments become bolder and clearer in intent. You remember how quickly digital technologies for manipulating image and sound became accessible, then ubiquitous in the first decade of the 21st century. But Fantasy Freedom and Meaning in Action still speak to the viewer, and perhaps to one another, in a similar – voice? Language doesn’t feel like the right register here, when everything is about tone and timbre. Key? I’m going with mode: it suggests more flow, more freedom to start where you want, pick up where you left off. Which is not to say that freedom isn’t always a contested idea, or that a mode can’t be constraining. 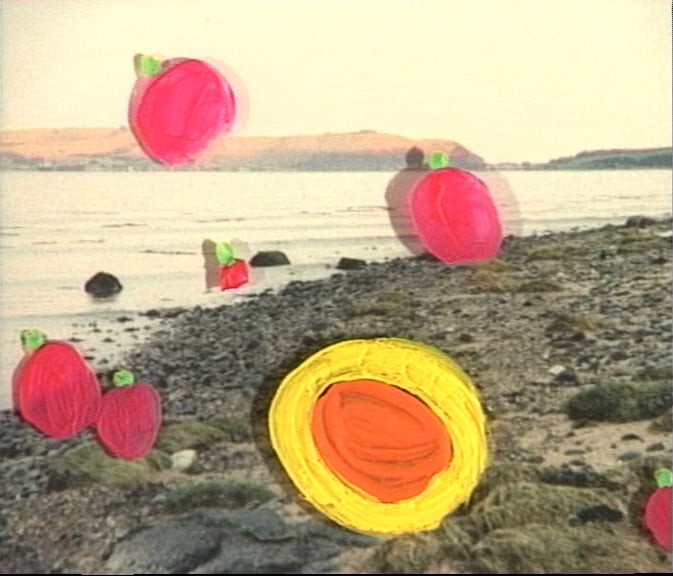 It is not just Fantasy Freedom’s title that queries the actuality of being free. We see photographs of landscapes punctured or pulsing with dots and blobs, glitchy visions of the natural world where plants open sort-of mouths – a theme echoed in a later film October (2011), with its footage of romantic woodlands and blue skies glimpsed as fragments and through cut-outs. Things move too fast for contemplation. On the soundtrack a sweetly sung vocal loop is superseded by the sound of breathing: urgent, disconcerting. Someone close to the microphone and almost at the edge of distortion; someone trying to get somewhere. The where keeps shifting.

In her essay ‘Animation and History’, Esther Leslie writes about how in animation nature is made different, “other”; how it involves the viewer in “a wrestling with what is natural about nature, and what is historical, which is to say, changeable about it”. Animation shows us transformations that defy logic and physics, mountains that shapeshift and come alive, plants and animals that speak. In Dove’s films nature is mediated, spliced, derealised, sonically as well as visually: in You (2003) and Luna (2004), looped birdsong takes on a synthetic quality, bringing to mind a field recording from an alien landscape alive with bright, proliferating fronds, tendrils and seeds. If our perceptions and sensations of nature are always filtered, the moments of contact between self and world always fragmentary, always somehow impossible, why not amplify the fragments, nudge them together and scatter them, keep them moving?

Sometimes Dove fragments the body as well as what it encounters. Eyes and mouths are a repeating and repetitive presence, pulsing across the screen in a number of films. In Meaning in Action its hands, legs and arms, becoming akin to wings and fins in their disembodied and overlapping movements. It makes you think about swimming – about what water does to your perception of light and sound, and what you do to the water. Paint drips, pale pink, green and yellow. Small startling blue waves, a loosely strung electric guitar hit with a drumstick or whatever else was to hand. The sound is fragmentary too, strobing and crunching, notes bending and falling, pooling and spreading. Voices sing together in a soft grainy harmony, wordless but implying a between-words language, a getting towards or away from words. 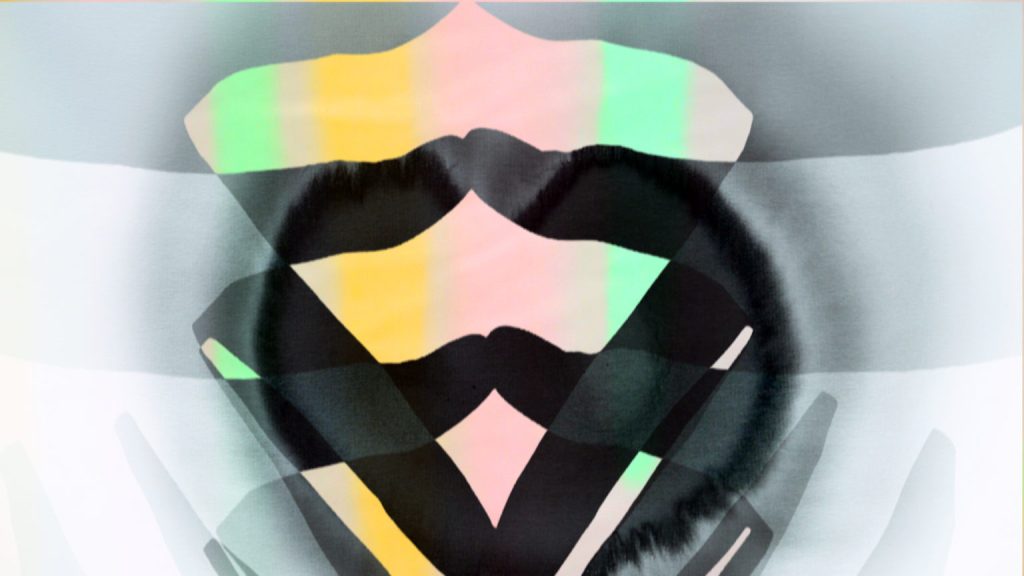 Dove’s own music and sound, made using her voice and assorted instruments, and both solo and in groups, appears often in her films. It’s a through line from her earliest works to her final ones, as well as a reminder that, for all the hypnagogic interiority of her work, it also speaks from, is in some instances generated from, networks of underground music in which Dove was both participant and listener. Some of these are local, like the Glasgow-based group Hassle Hound and filmmaker Luke Fowler’s record label Shadazz, as well as Muscles of Joy, the seven-piece band of which Dove was a member. Other musical choices appear at first glance more disparate, spread across time and geography: the Japanese ambient group World Standard, whose ‘Gondola En Nigra Silueto’ soundtracks Gondla (2005); and Bruce Gilbert and Graham Lewis’s Dome project – Dove’s Cruel When Complete (2005) is a cloudy, minimal vision of their song of the same name. But these 1980s referents of post-punk and Japanese New Age pop and psychedelia, which were themselves genres of collage, repetition and sonic repurposing, left an imprint on DIY music in the 2000s. You can hear it in the layers and loops, the presence of objects, toys and broken things: songwriting as timbral world-building, sound by sound. 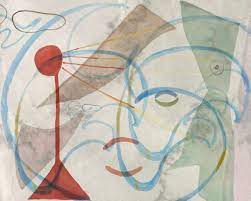 To situate Dove’s films in this context is partly to emphasise their tactile musicality; to explain why watching and listening to them provokes sense memories of manipulating delay pedals and bent circuits and crackly mics. It may also be a way of thinking about the generosity that underlies Dove’s work, because this kind of sound, her use of sound, is particularly generous – it gives a lot, allows for a lot. Sound becomes a connective force both inside and outside the frame, guiding and pulling together colours, textures and shapes and suggesting similar movements and meetings between bodies and gestures and things that make noises.

In a 2011 interview with Muscles of Joy, Dove’s bandmate and fellow artist Anne-Marie Copestake talks about how she came up with the group’s name. She was researching laughter and came across photographs taken in the mid-19th century by the French neurologist Duchenne de Boulogne, showing the results of experiments in which he tried to taxonomize human emotion by activating psychiatric patients’ facial muscles with electric probes. The famous images show faces smiling, frowning and contorted in anger. Among other things, Duchenne was looking to classify an ideal of beauty, an idea as contingent and likely to fail as any attempt to define or represent nature. In Muscles of Joy’s music, in Dove’s films, taxonomy is temporary, something to play with. We see and hear the pleasure in both making and breaking out of patterns, in building systems and in their dismantling. In connecting, disconnecting and reconnecting. This is the energy, this is where joy is.

Frances Morgan is a music and film critic and a lecturer in the School of Film & Media at the University of Lincoln.