“My work is an attempt to articulate ideas that are beyond language. I am trying to create work that stands on its own as a visual experience and doesn’t need a literary translation. Thinking in images rather than words is an attempt to keep the idea it its purest form.” – Katy Dove

Katy Dove was born in Oxford in 1970 and died in Glasgow in 2015. She grew up on the Black Isle in the Scottish Highlands and after studying psychology at the University of Glasgow gained a scholarship to Duncan of Jordanstone College of Art where she studied Sculpture, graduating in 1999. The practice she developed over the course of fifteen years comprised drawing, painting, printmaking, textiles, photography and moving image. Dove’s animations – for which she is perhaps best known – are a lush kaleidescopic synthesis of the many mediums in which she worked. Pairing digital software with automatic drawing processes of the hand, they are both systematic and organic. Dove’s animations reflect her fascination with the relationships between sound and the moving image, intuition and perception, harmony and disharmony. They correspond to both her affinity with nature and study of psychology, exploring the body as “the place through which our mind makes contact with the world … where our thoughts become actions.”

Dove was active in several artist-led initiatives and co-founded the band Muscles of Joy. She frequently collaborated across disciplines and her work is suffused with the energy of Glasgow’s fertile art and music communities. 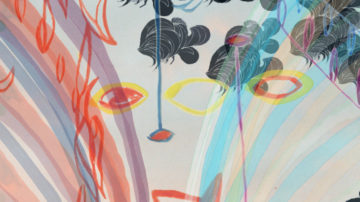