‘The snow has gathered on the mountain. The distance of this sight is like a smile; a smile remembered from great distance.’

The soul of the future historian of film as film falls somewhere among the rocks which shelter it. On the plain the agents and promoters of cinema, with their social, psychological, statistical trappings have encountered a blizzard from which they cannot escape. Slander, gossip, collective chaos inform them of their doom.

The Films of Beavers and Markopoulos may be the ones not to need a historian.’

Gregory Markopoulos’ Gilbert and George (1970) is a film marked by absence. Though a portrait of the artistic duo, the film indulges in none of the privileging of visibility on which the genre of portraiture often rests. Much of its twelve-minute duration is filled not with likenesses of the artists but with black and white leader. Occasionally a flash of image – a pair of feet, for example – will fill the screen for a brief moment before retreating again. The flow of movement, so crucial to most films, is missing. In its place is a rigorous engagement with the medium’s most basic elements, one that returns the viewer to the stillness of the individual film frame. The final film in a programme of Markopoulos’ work presented by Robert Beavers on 1 December 2012 at the TIFF Bell Lightbox in Toronto, Gilbert and George radicalized the premises put forth in a more tentative manner in earlier films such as Ming Green (1966) and Sorrows (1969), also on view. Within the context of the programme, it figured as the culmination of a working method deeply invested in negativity and withdrawal, one meant to induce a recalibration of vision and create the conditions of a changed relationship to the cinema.

The absence of the image in Gilbert and George serves as something of a metaphor for the place of Markopoulos within the history of American avant-garde cinema. After moving to Europe in 1967 with Beavers, his partner and fellow filmmaker, Markopoulos withdrew all his films from distribution. At the Toronto screening, Beavers explained that this decision was borne of a number of factors, including a growing dissatisfaction with prevailing conditions of projection and a feeling that experimental filmmakers were not given the same respect as individuals making films within a gallery context or visual artists working in more traditional media. Markopoulos wanted not only to be absent from the exhibition circuit but also from its history. He famously insisted that P. Adams Sitney remove a chapter on him from the second edition of Visionary Film: The American Avant-Garde, 1943–1978. The filmmaker spent the rest of his life in Europe, making work that was for the most part withheld from public exhibition. If the goal was to escape visibility, Markopoulos got what he desired; in 1993, David Ehrenstein wrote in Film Comment that at the time of the filmmaker’s death the year before, “neither he nor his works had been written of, save in passing, for well over a decade.”

Though the moving image is a reproducible medium, there are instances in which this reproducibility may be refused, whether for reasons ideological, aesthetic, financial, or some combination of thereof. The case of Gregory Markopoulos is exemplary of an ideological and aesthetic refusal. If the limited edition model restricts reproducibility in order to increase market viability, Markopoulos moved in the other direction, reining in the circulation of his films with absolutely no consideration of financial gain – on the contrary, he stood to lose income from the gesture. Instead, it was a protest against a perceived compromise. Though he embraced invisibility, writing, “The Films of Beavers and Markopoulos may be the ones not to need a historian,” there is nonetheless a sense that Markopoulos did not want his disappearance to remain in force in perpetuity. He held out hope for a future that would see his films accorded the respect he felt that they deserved, when they would be exhibited under ideal conditions.

Though it is impossible to know how Markopoulos would feel if alive today, there is a sense that this future has now arrived. Since the filmmaker’s death, his films have begun to circulate once more, albeit under tremendously restricted conditions. Following a retrospective at the Whitney Museum of American Art in 1996, films made before Markopoulos’ withdrawal have screened at selected film archives and museums, often with Beavers in attendance. In the third edition of Visionary Film, published in 2000, the chapter on Markopoulos reappeared. This new activity has rescued the filmmaker from the oblivion that Ehrenstein noted in 1993. But it would be wrong to understand the increased presence of Markopoulos’ work as a simple overcoming of the barriers to access the filmmaker once embraced. Rather, Markopoulos’ posthumous career is one predicated very much upon a continued withdrawal and an embrace of rarity, a strict control over the circumstances of exhibition. Screenings such as the one held at TIFF Bell Lightbox are infrequent, largely restricted to locations with strong experimental film cultures, and tend to occur only with Beavers present. The Toronto screening last December was, for example, the first time the filmmaker’s work had been shown in the city since his 1997 Cinematheque Ontario retrospective. None of Markopoulos’ films have been issued in any digital format.

Of course, such restricted availability is not particularly atypical in the world of experimental film. There is, however, a more unusual and extreme way in which the filmmaker’s contemporary reception is tied to rarity, one that has succeeded in creating the “film spectator of the future” that Markopoulos dreamed of. In the last years of his life, Markopoulos created a monolith that will remain absent from every movie theatre, a project that reinjects the medium of film with the auratic distance it was once said to destroy: the eighty-hour, site-specific cycle ENIAIOS (c.1948–1990). Between 1986 and 1990 Markopoulos reedited all of his existing film works, including those made after his departure from America, into a cycle consisting of twenty-two orders and gave the result a title that means both “uniqueness” and “unity.” He then destroyed all the original films, preserving only the tiny snippets that had been incorporated into the monumental work. These images are but glimpses lasting a fraction of a second, surrounded by black and white leader, thus reproducing and intensifying the strategy of Gilbert and George. The film was made to be screened only at a single location, a field outside the town of Lyssaraia, in Greece. Markopoulos named the site the Temenos, a word designating a sacred space marked off from normal usage, a place apart. After founding the Temenos Association, Robert Beavers organized the first screening of ENIAIOS in 2004, showing the first two orders. Subsequent editions in 2008 and 2012 attracted more spectators each time, with over 230 making their way to the Peloponnese last July. Eight orders have now been printed and exhibited.

Beavers and Markopoulos began to show their films at the site in 1980, even placing a somewhat cryptic advertisement in the spring issue of Sight and Sound that year. Unlike the films exhibited then, the Temenos screenings that have taken place since 2004 have been devoted solely the cycle meant to be shown nowhere else. ENIAIOS is certainly not the first site-specific moving image work: Morgan Fisher’s Screening Room (1968–) is a tracking shot of the movie theatre in which the film is exhibited, and thus must be remade each time it is shown in a new location. Robert Smithson’s Towards the Development of a Cinema Cavern (1971) is a plan for an underground cinema that would show only a film of the cinema’s own construction. More recently, Janet Cardiff’s video walks use mobile screens to orchestrate a confusion between real and fictional experiences of place. But none of these projects has the relationship to the natural world and to distance that one finds in ENIAIOS. Quite rightly, Mark Webber has called it “a cinematic parallel to ambitious sculptural projects such as Walter de Maria’s Lightning Field (1977) or Spiral Jetty (1970) by Robert Smithson.” The remoteness of the location – four hours outside of Athens, an hour from the nearest ATM – is key to the project. As Markopoulos wrote in 1979, “There, in the marvelous space, the Images of film as film, triumphant. Far, far from those who have had nothing to offer; far, far from those who have negotiated and multiplied; far, far from those who wished to gain what they could never achieve; far, far from those who said, We will always be there…” Far away from all of this and more, no spectator can be casual; all are transformed into pilgrims. Unlike the masterpieces of Land Art, though, ENIAIOS is tied to the temporality of the event. It simply will not be there all of the time, as de Maria and Smithson’s works are (changing water levels in Great Salt Lake aside). It is an absolutely singular experience crafted from a reproducible medium. A line from the poet Alfred de Vigny comes to mind: “Love what you can never see twice!”

Just as Land Art engaged with the problematics of mediation and circulation in the age of television, the appeal of the site-specific scarcity of the Temenos screenings begs to be understood in relation to the ubiquity and availability of images in digital visual culture. As more and more images are delivered to the spectator at the click of a mouse, often with close links to the commodity form, Markopoulos demands that his viewers travel to the Temenos and sit immobile for three nights in front of a silent film that itself possesses almost no movement, shown for no admission charge. ENIAIOS is a deeply challenging work, one that conceives of cinema as a site of contemplation and encounter. Its viewing is inextricable from the situation around it: the natural landscape, yes, but also the sense of community fostered over the course of the weekend. It is film in an age of video, emplacement in an age of mobility, collectivity in an age of atomization, attention in an age of distraction. Though Markopoulos has been dead for twenty years, there is a sense that the auratic experience of the Temenos has never been more contemporary. It functions as a kind of inverted mirror of our visual culture, the precise opposite of all that constitutes our normal experience of images, and is all the more compelling for this inversion. 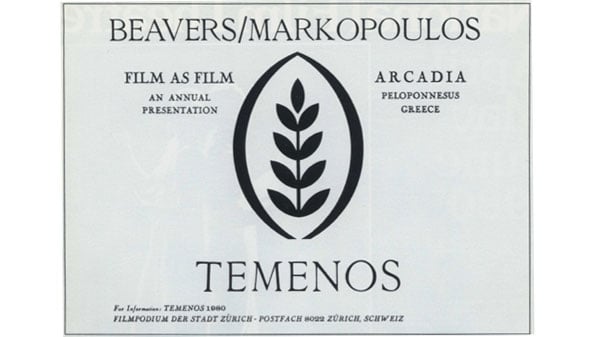 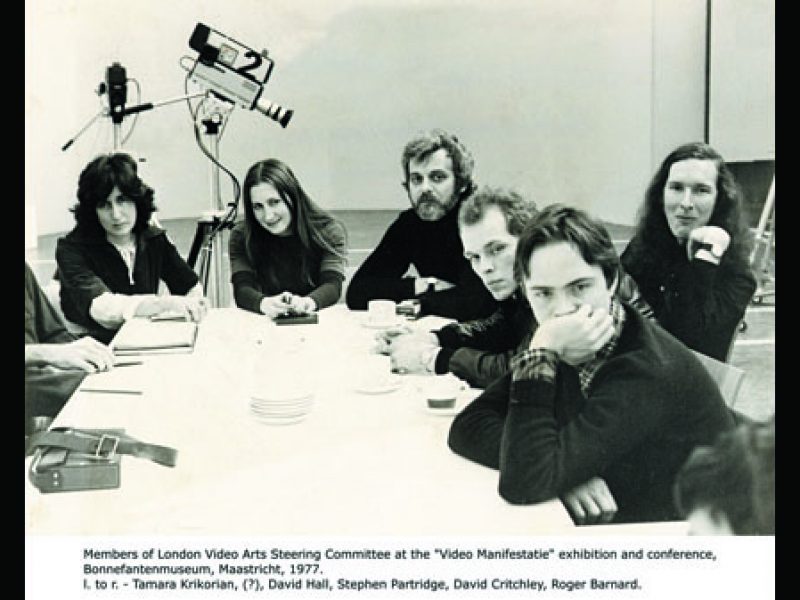 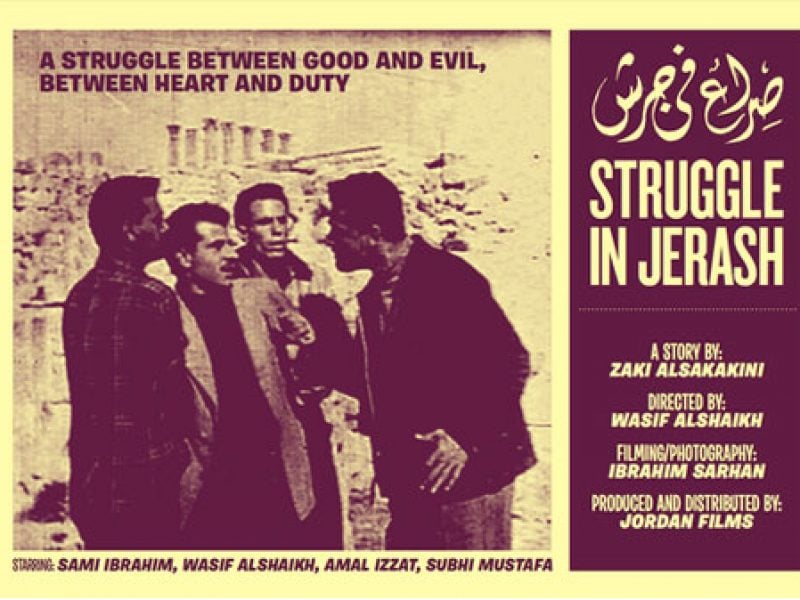 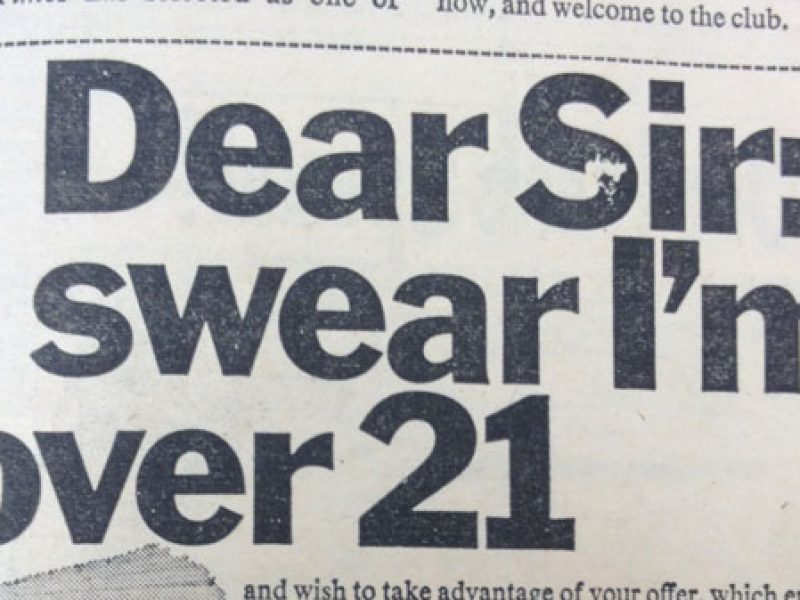