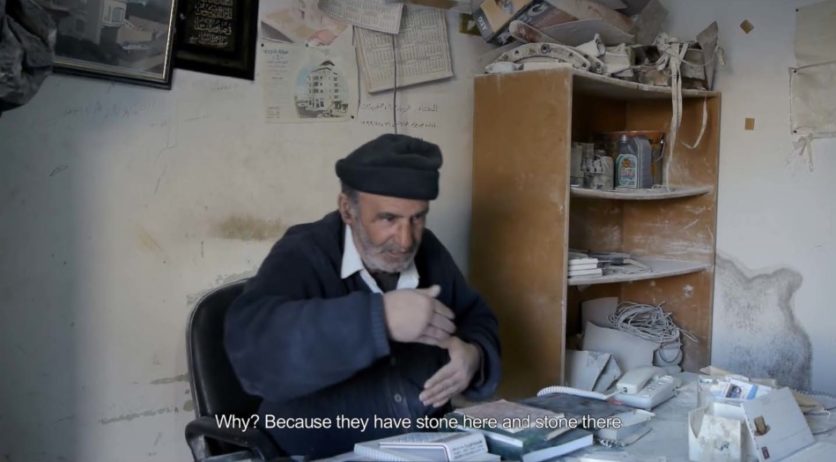 A quarry near Jerusalem at night; a stoneworker in his cluttered office; a backroom in a museum; a brief interview with an antiquities’ smuggler in an undisclosed location – Maeve Brennan’s films follow backward trails; they rewind to sites and processes that precede official accounts of events. Brennan takes you to the backstage of history, where the version that will reach the public is still being rehearsed. As the historical spectacle is deconstructed, deep emotional connections are forged between the viewer and the places and people on the screen.

The stories unfold quietly. They concern frictions that build up over time, across scales, and often manifest as absence in the material fabric: a pair of hands repairing an ancient amphora in The Drift (2017), restoration work inside the Dome of the Rock in Jerusalem Pink (2015), a deep incision cut into the earth in Beit Iksa Boys (2013). At times conflict is preempted by inconspicuous visual contrasts, like the car speeding through the stillness of the vast Beqaa valley, or by seemingly routine gestures with haunting meaning, like the Palestinian archaeologist’s hand pointing to a patch of barren land and beyond, as he names landmarks that are hardly discernible. Only later I realise that the foreground I have overlooked – the land itself – is the embodiment of what is at stake.

There is a deeper commitment here than merely pointing out absence where the artist sees it. The depictions of people make these films into tales of wholesomeness by weaving the characters’ endeavours and concerns back into the far-flung networks of materials and artefacts. When the guardian of the temples at Niha walks around the Ancient Roman temple in The Drift, his figure is tiny against the gargantuan wall, the very thing he has protected at various times of tumult. And yet, the ease with which his interview is carried out allows him to momentarily cease to be subservient to the grander narrative. His mere presence in the film, under the cypress trees, is what matters the most. His friend gives him a cigarette, he lights it and begins his story. Beyond rewriting histories there is that precious moment of uninhibited exchange between the filmmaker and the protagonist.

Another character in The Drift is Mohammad, a young mechanic who refits cars and puts them to the test on the empty roads of the valley. The drift turns out to be a controlled skid in the car, made using the handbrake. Mohammad’s ‘drifting’ is also the moment when the audience’s perspective decidedly splits from his, and empathy kicks in. I want to believe that he can accelerate out of the present, out of the valley, out of history altogether. But as the car spins and the dust rises, the thought of something constantly moving but never moving on is hard to push away. Since I first watched the film, I occasionally wonder whether his aversion to politics and his infatuation with speed eventually led to detriment, escape, or nothing. 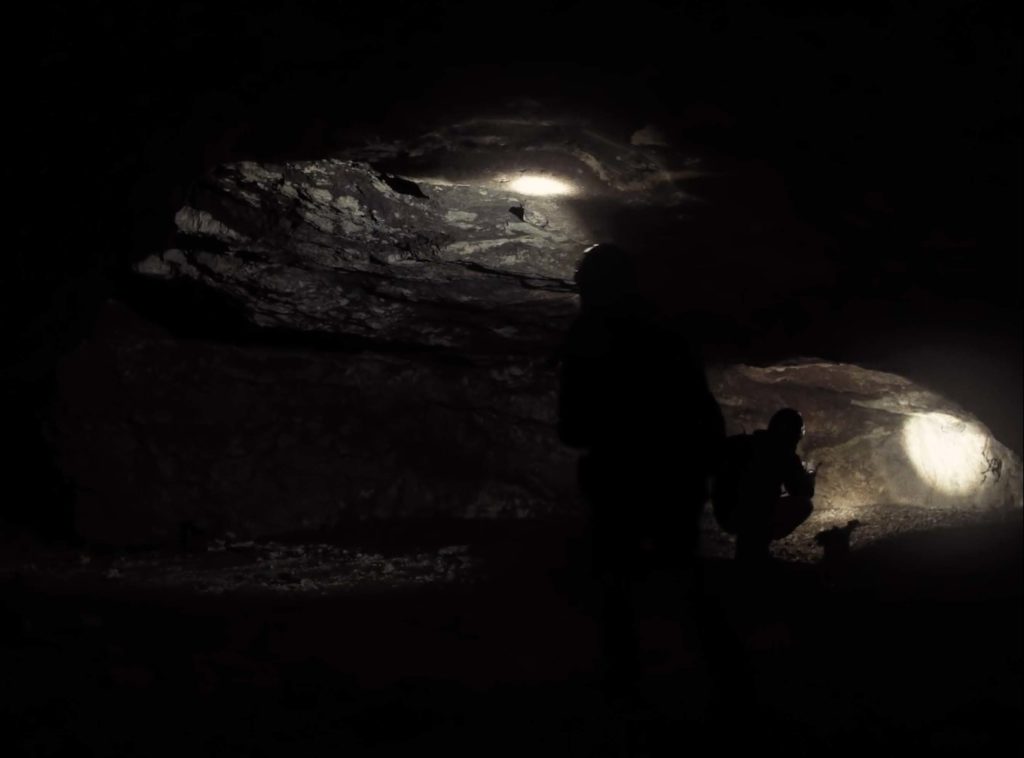 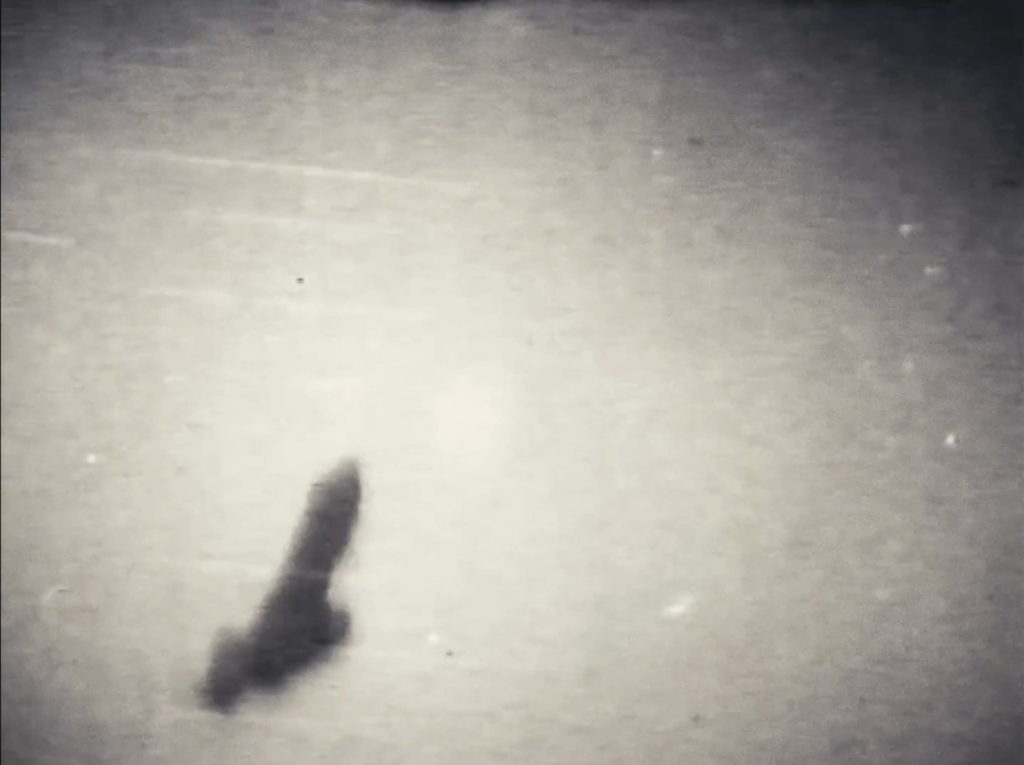 Listening in the Dark, Maeve Brennan, 2019. Poetics of the primordial: ecologists studying bats in a disused mine in Scotland; flickering images of a bat’s flight from archive footage of a lab test in the 1940s, which proved that bats echolocate.

Listening in the Dark (2018) has a different palette and accent, because it was filmed in Scotland rather than in the Middle East. It starts from the curious phenomenon of bats perishing as a result of wind turbines interfering with their echolocation. The investigation unfolds in three distinct spaces: a disused mine, where the bats reside, lab environments (including archive footage of biological experiments with the bats’ sonar and flight) and out in the open, by the turbines. The 4:3 image ratio domesticates the landscape, the extent of which would otherwise be irreconcilable with the bats as the focal point. In that sense, the narrower frame also helps contain the drama – when bat specimens that look like parchment are taken out of a drawer, it doesn’t feel sensational. Some of Brennan’s usual preoccupations – tactile records, preservation, layers of time – are here to begin with, but the destination seems rather different.

In Reflections on Echo, which catalogues experiments in sound by women artists, Jean Fisher writes:

[Echo’s] transmission is itinerant. Never identical to its source, her repetition is a constant production of difference. Its ‘speaking in tongues’, its disruption of syntactical order, signal a refusal to be tied to any fixed subject position. [1]

Is it the bats’ sonar – their visceral, itinerant dependence on echo – that triggers the cinematic choreography? It doesn’t feel disruptive; more like listening in the dark or through time, and looking around, trying to map out the primordial in science and transcribe it onto film. Rather than a syntax, it amounts to dreamlike notations. There is the periodic whooshing of the turbines’ blades; neat graphs that dissolve into archive footage of a bat’s flight, the flickering image overlaid with the (delightful!) musings of a zoologist; the light from the ecologists’ helmets that dances around on the mine’s walls to the sound of water dripping; and the pounding of the ocean on the rocks, all set off against the ancient, metronomic flapping of bat wings. The compelling minutiae that prompted the investigation in the first place are present until the end, but they keep giving way to wonderment at the possibility of re-narrating the world through cinema – Marie Menken in the garden, Jean Painlevé underwater, Kenneth Anger by the fountains. [2] 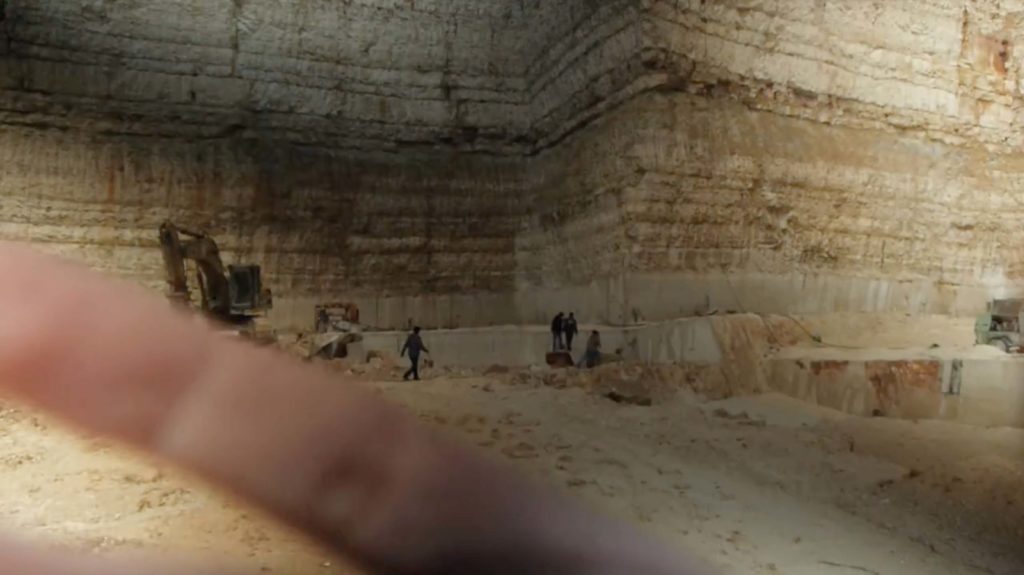 As a matter of habit, Brennan stays out of the frame and occasionally narrates through subtitles. But in Beit Iksa Boys, one of her earliest films, her voice is audible when she asks something, and later, when she laughs. The stonecutters refer to her a couple of times, and there’s also a glimpse of her hand uncovering the lens – a record of the beginning of engagement. These brief affirmations of her presence there, at the scene, remind me that for all the painstaking assemblage of histories, this set of works originates in something simpler: the joy in hanging out with the stonecutters, taking a fast ride in a rejigged car, or being offered a beetle on a pebble. And so, we emerge from history, relatively unscathed and with a sense of relief.

Ektoras Arkomanis is a filmmaker and writer. He teaches architectural history and theory at the School of Art, Architecture and Design, London Metropolitan University. His films and research examine urban areas that remain at the margins of history, planning and the city’s conscience. He uses film for its capacity to preserve and explore, but he is especially interested in what the medium omits, its inadequacy in describing things that are no longer there, and the narratives that are invented to fill these gaps. He is currently working on A Season in the Olive Grove, a long-term film/research project about the area of Eleonas in Athens. He recently edited a volume called Migrations in New Cinema, published by Cours de Poétique.