LUX Salon: Like slow breathing, it seemed to emanate from inside the walls

This programme derives its title from Nigel Kneale’s short story, Minuke (1949). The narrator, a realtor, recounts the unfortunate tale that leads his clients to flee their home, a near seaside bungalow lovingly called Minuke, or ‘My Nook.’ The resident family receives escalating non-verbal hints to vacate, seemingly from the house itself: plumbing outbursts, rearranged furniture, food ‘suddenly and revoltingly decomposed.’ They confide to the realtor, and though doubtful he begins to speculate mysterious causes after his own encounters. He recalls the bungalow’s foundations are ‘enormous flat stones’ with concrete used to fill the gaps; they could be Norse, ‘or even very much older.’ Before the family’s unnatural eviction, a climatic scene unfolds in the kitchen. A conversation between the realtor and the father of the family reveals the persistent and unnerving sound the realtor thought to be the inhale/exhale of the sea is a false presumption; the humble bungalow is too far from the shore. The source is closer: walls breathing, deep, to their foundation.

Kneale revisits ancient foundations and their unknowable capacities in the 1972 BBC teleplay The Stone Tape. As a research team moves into a country estate to set up their lab, with the goal of developing a new recording medium, rumors circulate of a haunting in the cellar. Their computer programmer has an encounter in this harrowing room, which pre-dates the rest of the estate. Emerging from the stone of the wall, along unused steps leading nowhere, is a woman in a Victorian maid’s uniform; she brings her arms up to cover her face and screams. This woman is an image, a translucent flicker. The rest of the team soon experience the apparition in repeat appearances as they try to ascertain how it is stored in stone, seeing a possibility for the new recording medium they seek. Their director claims: ‘It’s the room…there is no ghost…the room holds an image and when people go in there they pick it up. …It must work like a recording. Fixed in the floor and the walls, right in the substance of them. A trace of what happened in there. And we pick it up. We act as detectors—decoders—amplifiers. …It’d have to be in the stone.’ Further testing of this hypothesis leads to traumatic consequences; the layers of recorded sediment can be erased, or more aptly, re-recorded.

Situated at the intersection between human and non-human perception, recording technologies provide a durational though flawed frame for experiential events, mundane or otherwise. On rare occasions there are traces of an irrational sort hiding within the recording, emergences that move beyond perceptual limitations into the data stream, traces that point nowhere and everywhere at once. A recording can be a glimpse of the conceptually out of reach, an unnerving fracture, a witness.

Considering the recording in all its (im)material forms, with all its potential (both latent and actualized), this programme seeks to engage with emergent absence and presence, the nebulous qualities of the sonic, (un)contained narratives, and that which can be termed ‘unhappened’.

Erik Martinson is an independent curator based in London. He worked in Toronto at Vtape, a not-for-profit artists’ video distributor, from 2005-2014 and was a member of the Pleasure Dome curatorial collective from 2006-2014. He has curated screenings/exhibitions for Art Star 3: Video Art Biennale at SAW Gallery, Ottawa (2007); Vtape’s Curatorial Incubator (2009); the Rendezvous with Madness Film Festival, Toronto (2010, 2011); The Images Festival, Toronto (2012); A Space Gallery, Toronto (2012); Art Gallery of Mississauga (2013); Institute of Contemporary Arts, London (2015); Red Barn Project Space at University of California Santa Barbara (2015), and Chalton Gallery, London (2016). Recently he was on the selection jury for Videonale.15 at Kunstmuseum Bonn (2015). While living in London he is working toward an MFA in Curating at Goldsmiths College and is Assistant Curator for the Nuclear Culture Project at Arts Catalyst. He will attend a curatorial research residency at Rupert, Vilnius, during the autumn of 2016. 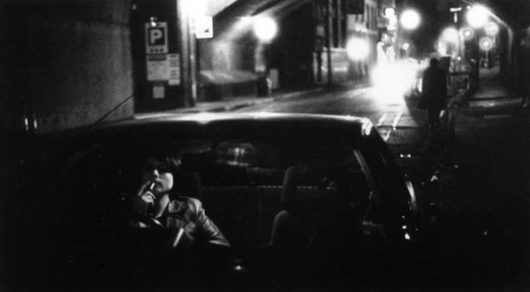 Still from Mark Aerial Waller's The Sons of Temperance, 2000.