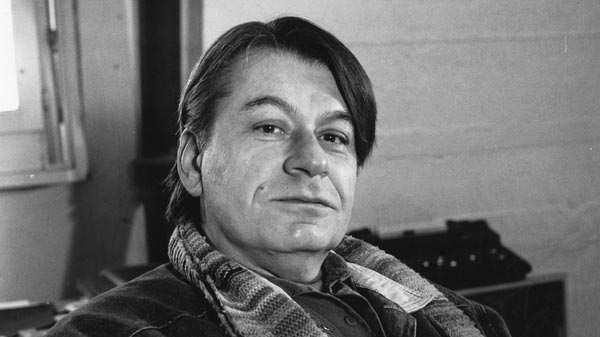 The groundbreaking director, cinematographer and filmmaker Stephen Dwoskin died suddenly on the morning of Thursday 28th June at age 73.

Originally from New York, Stephen settled in London after being awarded a Fulbright Fellowship for design research in the UK in 1964. Studying art under Professors Willem de Kooning and Josef Albers at New York University, he later took up design at the Parsons School of Design. While working as a painter and designer in New York, Stephen became close friends with his agent, the documentary filmmaker Emile de Antonio who introduced him to the bohemian Greenwich Village scene where he mixed with the likes of Andy Warhol, Allen Ginsberg, and Robert Frank. Dwoskin discovered experimental cinema watching Maya Deren’s films and was influenced by the transgressive underground films of Jack Smith and Ron Rice.

Stephen’s reputation as a graphic designer was already well established in the United States through his innovative covers for Industrial Design and Interiors. As early as 1961, he received the American Institute of Graphic Arts (AIGA) award for designing one of the ten best magazines to emerge in the United States in fifty years. That same year, he was also recognised with the AIGA Award for book cover design. His true love however was film, a medium through which he would expose both his performers and viewers, by his powerful exploitation of the interface between the immediacy of filming, the performer’s increasing self-disclosure over time, and the viewers own desire to look. His first films, Asleep and American Dream, he made with a simple Bolex camera while working as Art Director with CBS Records in 1961.

Once settled in London, Stephen sought out opportunities to meet local filmmakers. He popped into the Charing Cross bookshop, Better Books, where he met poet Bob Cobbing and filmmaker Simon Hartog with whom he helped establish the London independent filmmaking scene. He quickly became a leading figure, co-founding the London Filmmakers Cooperative in October 1966 and coordinating a series of underground screenings of films for the first Notting Hill Film Festival at the request of John (Hoppy) Hopkins. Living in Notting Hill throughout the 1960s, he became familiar with numerous poets, writers, filmmakers and artists who formed the underground scene.

Dwoskin was awarded the Solvay Prize at the 4th International Experimental Film Festival, Knokke, Belgium (1967-68), for his 1964 films, Naissant and Soliloquy. During the 1970s, he began a series of avant-garde feature films, which led to productions in Germany and France as well as the UK, and a succession of festival presentations, including The Directors’ Fortnight in Cannes. He later went on to receive the prestigious L’Age D’or (Bunuel) prize in 1982 for his comedic self-examination Outside In (1981).

Dwoskin began to develop his distinctive style in early films such as Chinese Checkers (1964), Trixi (1969) and Dyn Amo (1972), by initiating a triadic dynamic between the camera, performer and viewer through which the performers return the gaze of both viewer and filmmaker. His subtle deconstruction of the conventional system of the gaze disturbs and defies viewers to reflect upon their own habits of ‘looking’. The viewer becomes transfixed by Dwoskin’s unique perspective of looking, his slow-moving camera, his intense scrutiny of his subject and textured images, and his ethereal soundtracks. It was conversations with Dwoksin that led Laura Mulvey, his neighbour and friend in Notting Hill, to produce her celebrated essay on the ‘gaze’, ‘Visual Pleasure and Narrative Cinema’ in 1973.

Indeed, Dwoskin encouraged performers to engage with the camera to create a process of self- discovery between himself and the performer, as in Central Bazaar (1976), or to near-dramatic narratives, as in The Silent Cry (1977) and Tod und Teufel (1973), Dwoskin’s brilliant adaptation of Frank Wedekind’s play. Dwoskin’s camera is fearless, both in examining the desire to look and be looked upon, and in pursuing a depth of intimacy which is often disturbing. In 1974, Dwoskin turned the camera on himself to make the emotionally intense Behindert in which he uses his own body, which was left disabled by his childhood struggle with polio, to explore his relationship with an able-bodied woman, a practice he continued to develop in films such as Intoxicated by My Illness (2001), and his more recent masterpiece, The Sun and the Moon (2007). His 1994 film, Trying to Kiss the Moon, an autobiographical film-poem, presents home movie footage of his childhood in the United States prior to contracting polio, while Face of Our Fear (1992) and Pain Is (1997) reflect upon, indeed unmask, our fear of ‘difference’, while opening our eyes to the humanity of those who are perceived as ‘different’, ‘monstrous’ or somehow less significant, whether it be the result of age, disability or illness.

A respected teacher of both design and film, Stephen taught at the Royal College of Art and the London College of Printing. He wrote the 1975 book Film Is, a comprehensive personal account of the International Free Cinema, and the 1993 photo-collage essay, Ha Ha! (La Solution Imaginaire). Dwoskin’s work has been the subject of major film retrospectives in over fourteen cities, including New York, London and Geneva, with two recent retrospectives taking place at the British Film Institute in 2009 and the Arsenal in Berlin in 2010. His complete oeuvre consists in more than fifty films, plus a wealth of paintings, photo-collages, drawings and designs.

Dwoskin’s 1968 film Take Me is currently on show until 29 July at the exhibition Better Books: Art Anarchy and Apostasy at Flat Time House gallery in Peckham, while Alone (1963) will be screened at South London Gallery on 25th July. His final film, Age Is… (2012) is to receive its world premiere during the Locarno International Film Festival to be held from 1-11 August.