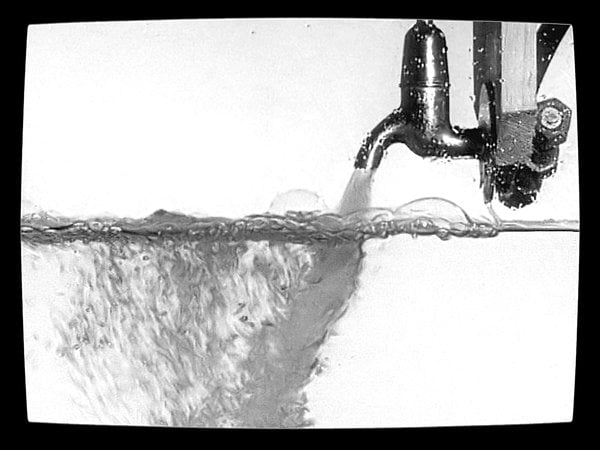 Ruth Beale (RB): Now we’re in the middle of the production of our three monthly events, it’s pleasing to see relationships emerge between the films, the performances, the experiences of the online audience and the live audience at Eastside Projects. During the first event, I quickly realised that what we are doing is not just performance-to-camera with a bit of live frisson, but a scenario with a tension that spreads across the different platforms. The films so far have shared this too: David Hall’s classic TV Interruptions (1971/1993) works particularly well as an intrusion in the broadcast. There’s also something about how much they are rooted in their time – the black and white burning telly probably filmed on 16mm, the one for MTV the colours and textures of 90s punchy pop TV – but they still operate as interventions and playful social commentary.

Nicole Bachmann (NB): After doing Take One we realized we had to rethink how we programmed. We wouldn’t be able to screen John Cage’s 36 Mesostics RE: and not RE: Duchamp (1978) at the end of Take Two as we had planned. The film would be too long and change the whole dynamic of the broadcast. What worked about Take One was that the performances and films were roughly the same length, with David Hall’s short TV Interruptions in between. I think this gave it a nice tension and wove the live performances and the films together as equal partners. Suddenly having a really long film at the end felt like it would upset the balance.

RB: The character of the films has been important in keeping this balance. We included Maya Deren’s Witch’s Cradle Outtakes (1949) as it’s so performative. It changes constantly, like a dance, which was interesting next to Eddie Peake’s Cowbell Headbonk Sound Effect Part One (2016). It is incomplete, with snippets of experiments and scenarios; outtakes to something that may or may not have existed as a whole, finished version. It may or may not have intended to be seen. That’s so different from 36 Mesostics RE: and not RE: Duchamp which is very much  made for TV – I would love to show something with this tone in the broadcasts, but it’s tricky as we are not specifically exploring TV as a context.

NB: One of the reasons why we wanted to show 36 Mesostics RE: and not RE: Duchamp was its very simple set up. It cried out aloud: “Performance to camera”! It was filmed in 1970 for Soho Television. John Cage is sitting on the floor reading from his book of the same title. While he is reading, the camera angles change from an introductory shot with an overview of the scene, to various close-ups of John Cage and the book, intersected again with wide shots of the scene. It really brings out the question of what the live audience sees and what the audience of the live broadcast experiences. On the one hand you have the moment of the event, being there with all your senses. On the other hand you have a privileged view through the eye of the camera, a closeness you wouldn’t have by attending it live. These were also questions that you were addressing in your work Their Constructive Materials (2016) about what the live audience sees and what the broadcast audience sees.

RB: I wanted to create a situation that exacerbated the difference between the live audience’s experience and what the camera sees. The audience at Eastside Projects could see the production: me moving objects under the camera, and the actor (Sarah Hamilton Baker) reading live. The online audience could see the choreographed movement of the objects in front of the camera, much more edited, contained and curated. Each was privileged in some way.

NB: In Take Two we’ll be showing Lis Rhodes’ Dresden Dynamo (1971-1972) which is yet another kind of live performance to camera. In Dresden Dynamo the filmic material itself creates the image and the image creates the sound. Rhodes stuck Letratone stickers onto the film itself. Their structure and form dictate the accompanying sound of white noise and atonal bleeps. The performance and moment of realization of the work takes place within the material.

RB: One of the things we came across in our research was the whole genre (if you can lump them together like that) of experimental filmmakers who use film in a sculptural way, as a material. These films/performances are, by their nature temporal, made for a live – and often one-off – experience. It was great to find and be able to show this work, which uses the concept of intervention in the material of film, and see it somehow become a kind of proto-experimental electronic music video in the process!

Take Two takes place on the 1st of April at 7:00pm at Eastside Projects and will be broadcasted live on the This Is Tomorrow website.