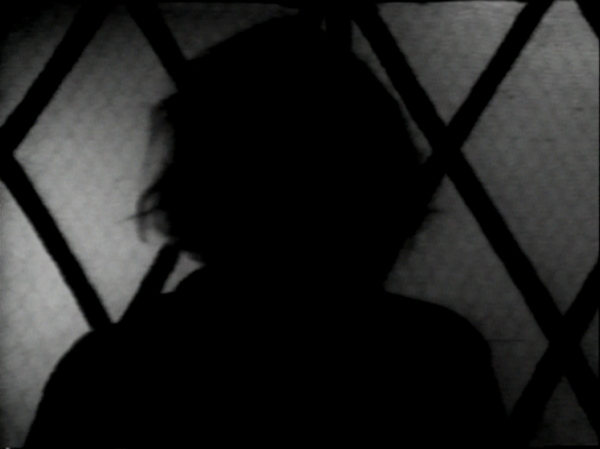 Image Credit: a still from The Red Tapes by Vito Acconci

Nicole Bachmann (NB): I was really excited to start our residency at LUX, but also nervous because I wasn’t quite sure where to start. The obvious keywords were performance, live, text and language as we were looking for films that would go alongside our live performance program at Eastside Projects which would be broadcasted by This is Tomorrow. Thus we were looking for films that dealt with the idea of performance to camera, liveness, which were text-based and possibly sequential.

Ruth Beale (RB): Yes that point of approaching an archive with a vague idea of what you want is always daunting and exciting, because there’s an uncertainty of how to get there, or what you will find, and whether what you want exists. We found some real gems immediately though – like Mark Leckey’s March of the Big White Barbarians (2005). I love how it has a choir (which he’s put together), chanting (which works for our idea of performance) and use of language and text, but it’s also making a brilliant statement about public art, and the City of London and maybe the march of the finance industry’s tasteless sculptures. Then there’s always the point where you have to take a more sideways view to find your way to other works, and bringing different ideas to the table helps. I think we always approach things slightly differently, which makes it exciting to work together.

NB: Yes, our perspectives are informed by our own practices and we bring our specific interests and knowledge to the project.  Mark Leckey’s film is a good example of how we get equally excited about the same film but about different aspects of it.

One film I really loved was Red Tape 3 by Vito Acconci (1976). It had all the ingredients I was looking for: the voice by itself as the main character, an interesting play with what’s on screen and what the voice does, an abstract narration, playing with the rhythm and melody of language, speaking directly to the camera, giving a feeling of liveness and immediacy. It would have been great to show it alongside the live performances, adding an extra layer to the question of how to think about performance for camera, being that itself, even though undeclared, but it was just too long!

RB: I found that film really extraordinary because of the way he is engaging with the camera, playing with scripting and sort of putting himself on the line as a performer, to express his ideas about language. It challenged us to consider how it would be received in a broadcast – each of the 3 parts is 45 minutes long – and think about what can be sustained in that context. For example, we both really enjoyed Kevin Atherton’s work In Two Minds (1981). In a twenty-five minute conversation between his live and recorded selves –the first recorded three years earlier than the second, but both now witnessed as recordings – he challenges himself over his artwork, his motivations for being an artist, where and why he presents work, and the audience’s role. It’s a gentle, conversational pace (perhaps too slow for broadcast?) like he’s really trying to work something out, but the past self is occasionally impatient for answers, interrupting the flow, hoping his future self will be wiser, his ideas more resolved.

NB: There’s a lot in this idea of creating something more than mere documentation. Storm De Hirsch’s Newsreel: Jonas in “the Brig” (1964), was supposed to be just that: a newsreel. But it is much more than that. Shot in black and white, it captures the whole excitement of the endeavour to break into a seized theatre and film a play in one night. It makes you feel the excitement, the frenzy of the moment. There is a feeling of urgency, breathlessness, intensity in the way the camera follows its subjects, sometimes wobbly but always a direct window into the scene. It feels like a live performance, not so much mediated by camera but transposing the event into the now, and making me feel part of it, feeling the atmosphere of that moment.

RB: For me, Iain Forsythe and Jane Pollard’s File Under Sacred Music (2003) is a great example of how complex the idea of documentation can become.  It’s is a surprising mix of the archaeological and reverential: an extreme homage to the cult status of a performance by The Cramps for the patients at Napa State Mental Institute, California in 1978.  As a reconstruction, the live performance is real and sincere, then there is the knowledge that it is carefully orchestrated, down to the clothes and technology: the once, twice removed, filmed-off-the-telly video. There is the perversity of making the film mimic as closely as possible the real, bootleg video: the result being almost the same as the original object, and the idea that this creates something more real, more immediate, more live than if it had been filmed in HD, had we’d seen the beads of sweat dripping from Alfonso Pinto’s brow. It’s an inspiring start for thinking about how these issues will play out in the performances at Eastside, as well as the films.

Take One takes place on the 4 March at 7:00pm at Eastside Projects and will be broadcasted live on the This Is Tomorrow website.