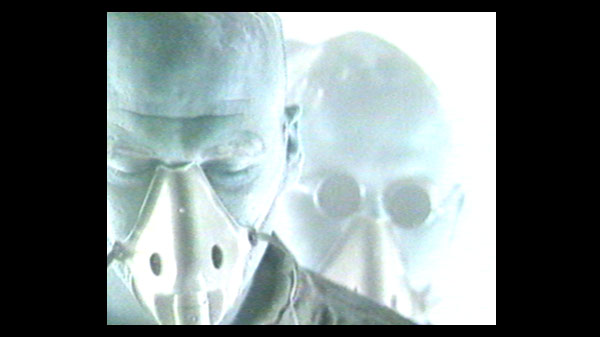 Eleanor Ivory Weber has curated the online exhibition Toxic Communions for the LUX website. here she explores how the ideas of the philosopher Peter Sloterdijk inspired her choice of works from LUX’s collection.

States of somnolence are states in which people move as mere trend followers under the trance of the normal. Because the forthcoming “total war” will in principle be battled by atmoterrorist and ecological means (and therefore in the medium of total mass communication), it aims to strike at troops’ “morale,” troops who are increasingly seldom distinguished from the general population. Both combatants and non-combatants – the synchronously gassed and the simultaneously provoked – become bound together in a state of collective somnolence through toxic communions … What then proves particularly dangerous are the climatic toxins emitted from people themselves, since, desperately agitated, they stand sealed together under a communication bell jar: in the pathogenic air conditions of agitated and subjugated publics, inhabitants are constantly re-inhaling their own exhalate. – Peter Sloterdijk, Terror From The Air, Semiotext(e) 2009

The comparisons may sound extreme, but perhaps it is rather less a question of seeing connections than of breathing them – and breathing is both unconscious and unavoidable. With no choice but to keep breathing, the question of what our planet’s land-dwellers are breathing has seldom – if ever – been relevant. However acclaimed German philosopher, Peter Sloterdijk, argues that since 22 April 1915 (the day the first ‘gas regiment’ launched an attack during WWI) the question of air (-quality, -space, -time, etc.) has become increasingly pertinent – not only as evidence of increasing awareness of the environment and our consequent desire to control it, but even more as the tendency which has come to define our epoch.

Indeed, the source of the current era’s originality is this atmospheric or background ‘explication’; the making-explicit of what was previously given and the potential manipulation of that ex-given for militaristic, political, financial, etc., goals. Rather than target bodies on a singular level, this new paradigm modifies the environment conducive to life – in the most extreme cases rendering it unliveable for humans and other animals (e.g. breathing becomes lethal via toxic gases). Sloterdijk argues that this concept can be identified not only in warfare but also in spheres such as product design and mass media (e.g. the use of scent-design to encourage consumers to buy; the systematic obstruction of access to alternative news sources, the resultant production of psychologies on a mass scale, etc.), to the extent that communication itself becomes both a tool of and the vehicle for a world that is constantly “reinhaling [its] own exhalate”.

The online exhibition Toxic Communions tries to explore some of the ideas put forward in Terror From The Air, less to justify the works through philosophical discourse than to consider how these concepts might look in moving image; how artists working in film and video are at once generating and disrupting the toxic communion in which we all partake.

Thus the juxtaposition of works by artists from the USA and UK spanning the last thirty years (arguably the crucial period in the development and confluence of mass media, product-design/-placement and the concept of terrorism), hopes to point to and provide a sense of the tension inherent to an era exemplified by a general loss of trust in the given. As Sloterdijk phrases it: “… when everything is potentially deceptive and suspect, neither totality nor the possibility of being a Whole can any longer be inferred from external circumstances.” In this way, the selected videos perform a dual function; they at once elucidate particular aspects within, and are entirely products of, a situation of general suspicion. This double bind – manifest in Chris Saunders‘ Annabel (1995) – reflects the difficulty of demarcation when the environment or context is no longer a “benevolent surrounding” but is itself subject to scrutiny. Unfortunately (or not), there is no longer any rational basis from whence to prove this is not all a hoax.

Bearing this in mind, we can see that Lenka Clayton‘s Qaeda Quality Question Quickly Quickly Quiet (2002) exposes not solely a definite reality behind George W. Bush’s infamous ‘Axis of Evil’ speech via the frequency of particular words, but also points to the profound skepticism within and towards contemporary politics. In this world words become empty signifiers which are employed more to fill pre-determined agendas than to actually express sentiment. A similar conflict between textual intention and possible interpretation is present in Terry Flaxton‘s Prisoners (1984), a documentary about the making of Apple’s advertisement for the first Macintosh computer. Flaxton consciously questions Apple’s reference to George Orwell’s most famous novel and their attempt to reappropriate that reference for their message of technological liberation. He intersperses footage of the ad with interviews with extras on set and quotes from Nineteen Eighty-Four itself, revealing the impossible entanglement between the commercial aspirations of the advertisement, the reality of the workers, Orwell’s dystopian prediction and the artist’s own position within this economy (as official documenter of the making-of process).

Thomson & Craighead‘s short piece Several Interruptions (2009) allows, at first glance, a more literal take on the idea of breathing space and the making-explicit of mankind’s dependency on the existence of breathable substances. Yet, it also – perhaps ironically – meditates on our own embeddedness in an atmosphere and mediascape that at once encourages self-expression and creativity via sites like YouTube (where the clips are retrieved from) and suffocates our ability to express ourselves outside a predefined framework.

American bom (1982) by George Bayer, a wildcard find in this toxic communion, strikes as curious largely because it is very difficult to pinpoint the filmmaker’s position or stance regarding the strong themes he addresses and correlates (the USA, nuclear power and weaponry, manners and the city, ‘political fanaticism’, etc.). This nuanced, even opaque, approach seems to offer an unexpected and prescient insight into what thirty years later would feel retrospectively familiar, perhaps not least because of a certain non-committal attitude, for which this video collage could be seen as a prototype.

Somehow, then, Jem Cohen‘s film, NYC Weights and Measures (2005) serves as an observational pause amongst the incertitude, allowing us to slow our breathing – at least momentarily – and maybe just see what we see. It should be noted, however, that on one occasion during this period Cohen had some footage confiscated by a ‘Terrorism Task Force’ who suspected him of being a threat to ‘National Security’ for filming in certain parts of New York City [you can read Jem’s account of the incident here]. So who is watching who? Who is breathing in whose exhalate? The question of (mis)trust works in every direction and the connections are as diffuse as the atmosphere itself.

If the selected films have something in common, even a toxic common, I propose it is in their attempt to give us breathing holes: spaces in our surroundings that suggest alternate ways of inhaling the world, and possibilities of thinking it differently or newly – even from within the toxicity itself.

Eleanor Ivory Weber is a writer and curator. Her website is http://raddestrightnow.blogspot.com. 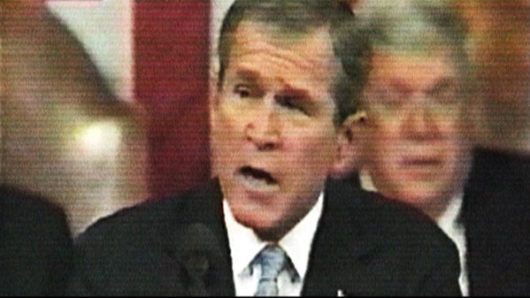