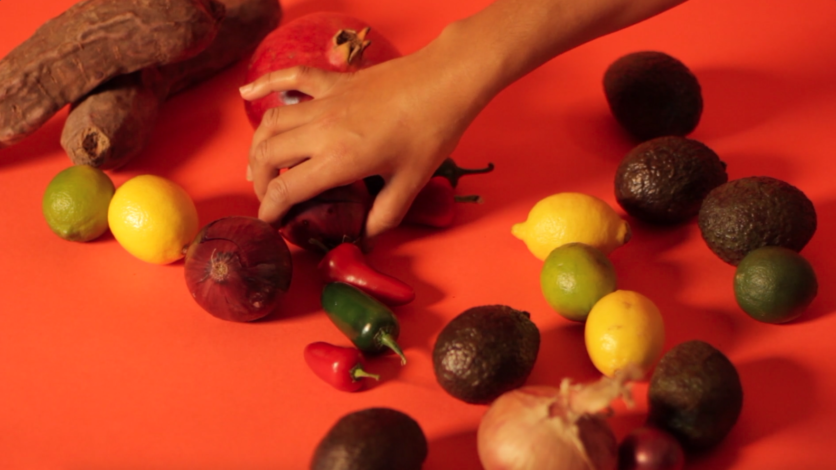 Tell me the story Of all these things, Rehana Zaman, 2017. video still

Her movements are already punctuated

Rehana Zaman’s Tell me the story Of all these things (2017) makes room for new visual imaginations that centre South Asian diasporic experiences through a non-linear lens.

The work presents a conversation and cooking demonstration with the artist’s two sisters. While one sister speaks about what it means to navigate the terrains of womanhood, partnership, religion and sexuality, the other sister remains more on the margins; we catch a fleeting reflection of her presence in the lid of a pan. These intimate encounters are contrasted with screenshots from the E-learning government tool ‘Prevent’, which is a training program and introduction to the Prevent duty aimed to “safeguard vulnerable people from being radicalized” in relationship to terrorism; and an animated amorphous figure that submerges within a desert-like landscape.

Tell me the story Of all these things continuously plays with dislocation and intimacy, and the temporal arrangement of migration and journeys of self-discovery. A close shot of hands grinding ginger, the rhythmic cutting of onions, and witnessing the stirring and marinating of spices with tomatoes become symbolic for a ritual performed in many diasporic kitchens throughout the UK. The making of geography in those moments allude to Stuart Hall’s well-known words, “We are here, because you were there”, which illustrates the position of Black British post-colonial migrants in the UK. This is further punctuated by the artist’s sister, Farah, who can be heard reflecting on Dubai, Pakistan and the United Kingdom, and questioning: “Who is me?” Yet, instead of a traditional stereotypical vision of brown women in the kitchen making curry, we experience a radical honesty that alludes to the potency and liberatory potential of the kitchen space. The focus of hands cutting fine pieces of fish are followed with the placing and replacing of a lemon against a colourful background; hand gestures and pieces of fabric and cloth are woven into the texture of the work. Placed within a context of Black and Women of Colour feminisms that have informed artistic production (and vice versa), I recall other visual imagery of hands and labor. In Daughters of the Dust (1991) by Julie Dash, the family matriarch, Nana Peasant, and her indigo stained hands becomes a narrative strand; or A Love Supreme (2001), a short film by Nilesh Patel, the focus is on hands making samosas. There’s a stillness embedded in these works of movements that reflect past histories. Here we witness intergenerational storytelling through spices. 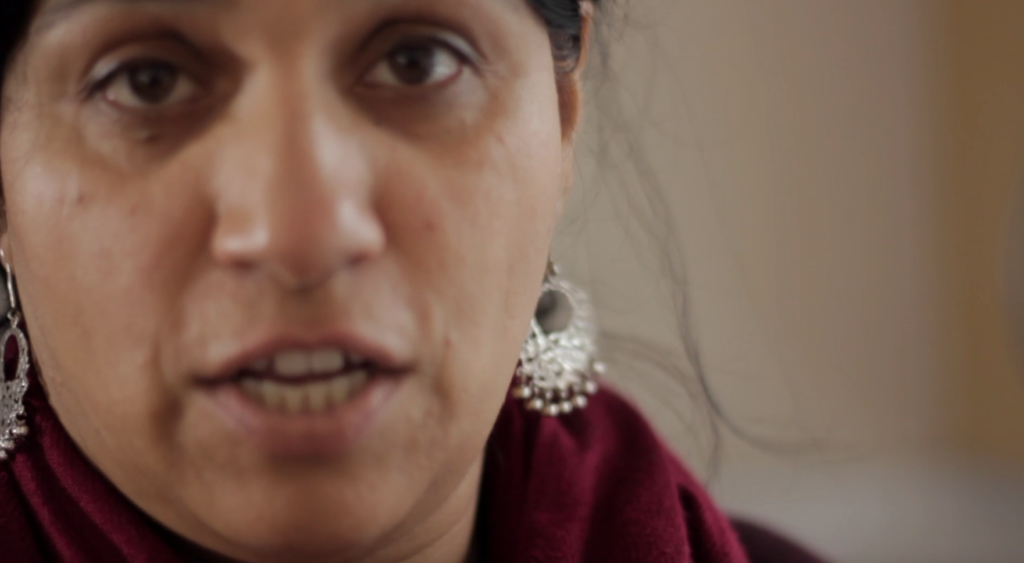 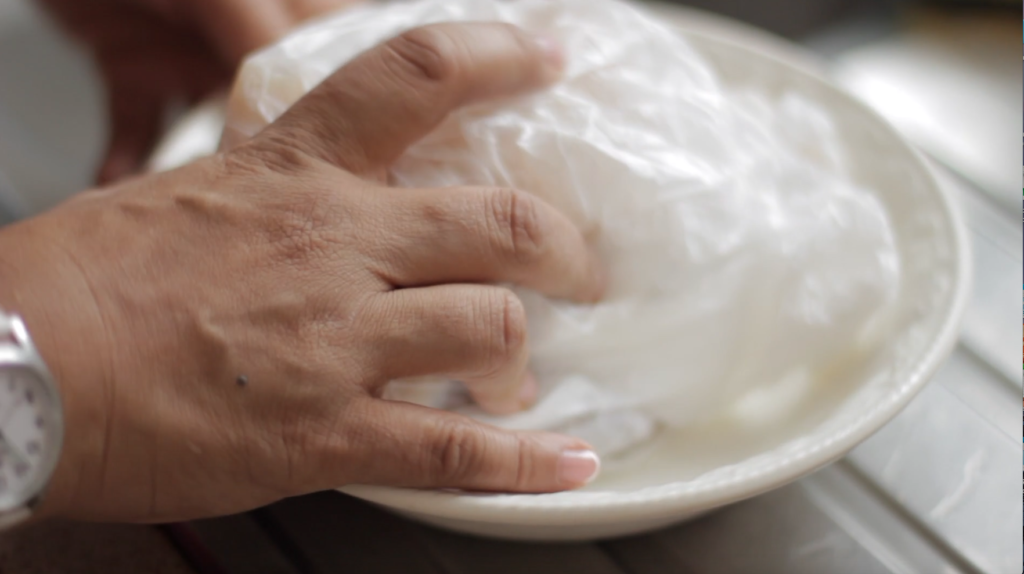 Absent all the same. Hidden. Forbidden,

Either side of the view.

Side upon side. That which indicates the interior

The fragmentation in the work is inspired by Dictee, a 1982 book by Korean American artist Theresa Hak Kyung Cha that brings together different notes, thoughts, drawings, languages and scribbles. Dictee discusses the migration and exile of the author’s parents to China, and reflects on Cha’s own experiences with moving to the United States. The poetics of Cha’s words subtly inform the use of the camera, light and contrasting imagery in Zaman’s work. The way the work is edited and shot guides the viewer into a fragmented reality of seemingly related themes. Zaman makes use of different narrative strands that could be read as separate non-linear vignettes. Taking the time to read Dictee in conjunction with Zaman’s work is worthwhile, as it makes clear its hybrid nature and a rejection of narrativity. In particular, Tell me the story Of all these things makes use of different texture and (non) readability by switching between different footage.

The amorphous womanly figure walking with a particular type of militancy seems dislocated. Why does she appear here? With a frantic type of boredom, the figure loudly steps, unsure of the destination, through the brown sand-like desert. We are forced to join this ambivalent figure in this journey. She drinks from a can only to later eject the fluid, blows her cheeks, and morphs into the space that is made up of her. The emptiness of the figure becomes generative in the sense that her abjectness allows for hybridity within a liminal space. The insertion of her presence alludes to the commentary of texture, and what it means to both feel and read through a non-linear understanding of subjectivities. 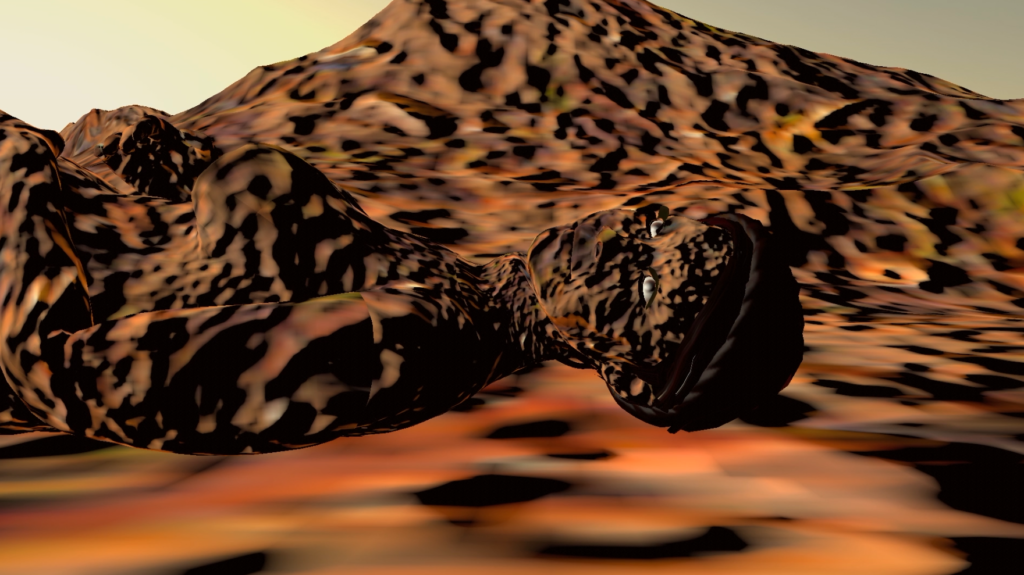 One empty body waiting to contain.

Conceived for a single purpose and for the purpose only.

The E-learning government tool Prevent offers an “introduction to the Prevent duty, and explains how it aims to safeguard vulnerable people from being radicalized to supporting terrorism or becoming terrorists themselves”.[2] The government tool forces us to think about the current political climate that thrives on commodifying the idea of ‘stranger danger’. The encouragement of suspicion undergirds the entire Prevent legislation. We have begun to witness the enforcement of such legislation on a worldwide scale, illustrated in the bans of late by Donald Trump. The economy of gratitude is an affluent one in this context, where the migrant must forever be thankful for the opportunity to reside in the land of “possibility”. The shifting economical imperial implications of this are hinted at when Farah recalls her first UK cleaning job after leaving Pakistan, for which she earned seven pounds a day. She now considers relocating to Dubai to ensure a better quality of life. The insertion of the Prevent footage adds a deadpan quality to the work. The animated figures in Prevent are accompanied by a somewhat nervous making tune that cheers on the ‘good citizen’ in their important mission to detect potential danger. The way that Zaman merges different reflections on the body within the work speaks to ideas of governability. Which bodies can be governed and how? Perhaps a timelier question is for whose benefit do we need the figure of the stranger? I am reminded of how bodies are made into strangers. Sara Ahmed best describes how this happens: “the governing of bodies creates strangers as bodies that require being governed”.[3] 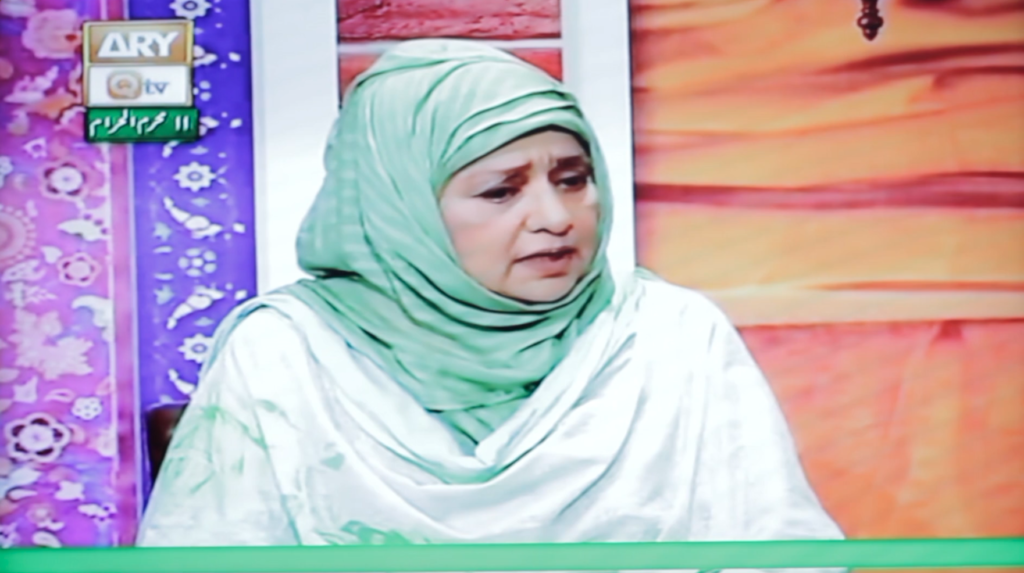 In Tell me the story Of all these things, the narrative shifts between personal and general observations, and allows for Farah’s subjectivity to be rooted in both. She reflects on her own sexuality and her erotic power, which at times is also quite candid as she ponders why one would need a husband except for sex. This in itself provides a welcomed conversation on gender and agency. Brown women’s pleasure is often dictated through the submissive idealization of womanhood, and historically controlled by intra-cultural patriarchy and denied by the Western colonial gaze. Farah’s pleasure—such as her newfound interest in skiing or her sisterhood with Arabic women and poetry readings—become a political non-oppositional space. These small productive spaces within the work are refreshing, and become an entry point for further conversation.

The fragmentation of visualization in Tell me the story Of all these things records the stillness of movement, and disrupts ideas of what it means for British Asian Muslim women to take up space, and to be viewed through the prism of desire and terror in the same glance. The Western gaze appears to be caught between the fantasy of veiling and unveiling, both rooted in a violent desire of control. State controlled and condoned forms of “unveiling”, symbolic or physical, are ingrained in the anti Muslim rhetoric of the nation. Not enough do we hear the voices of brown women articulate these complexities, and Tell me the story Of all these things reflects these politics of narration and offers much-needed commentary on the British Asian Muslim experience within a post-Brexit context. Weaving in gender, race and class, Zaman shows how her practice is shaped by an interrogation of social dynamics and is often generated through conversation and collaboration. The layers and dis-assembled arrangement offer a script in which brown bodies need to make sense of time and space today. There’s commentary on our resilience, the making of home, sharing sacred intimacy, and the necessary arrival and embodiment of the space invader who disrupts the expectation of complacency into the system. Ultimately the work turns outward, projects into the audience and asks the viewer: how do you feel?

Chandra Frank is a PhD candidate and independent curator. She holds an MPhil in African Studies from the University of Cape Town and is currently a PhD candidate at Goldsmiths, University of London. Chandra’s work is focused on the Black, Migrant and Refugee women’s movement in the Netherlands during the 1980s. She explores the role of archives, transnational queer kinship, the making of feminist geology and the politics of pleasure. Chandra has taught on feminism, queerness, and popular culture and given lectures about her work internationally. She has written about art and her curatorial practice for Africa is A Country, Discover Society and Warscapes. Previous exhibitions include Re(as)sisting Narratives at Framer Framed (NL) and the Homecoming Centre, District Six Museum (SA) and Fugitive Desires at 198 Contemporary Arts & Learning (UK).

[2]‘You Have Accessed the E-Learning Training on Prevent’, HM Government. https://www.elearning.prevent.homeoffice.gov.uk 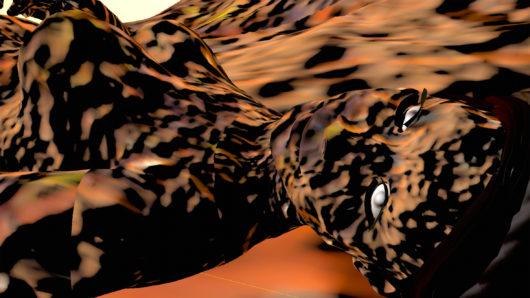 Video Tell me the story Of all these things Rehana Zaman 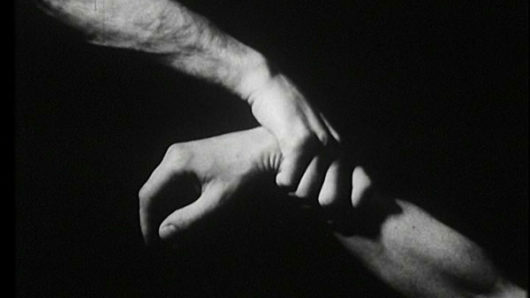