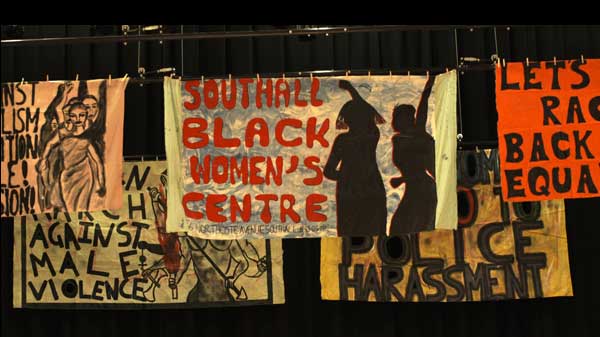 Frieze Art Fair (13-16 October) has become a pivotal date in London’s art calendar. As well as everything happening under the big top in Regents Park, including both the vast commercial fair itself and Frieze Foundation’s excellent curated programme, there is a small galaxy of other exhibitions, screenings, events, talks, gigs, parties etc taking place in town around the same time. It can be hard to navigate through the hundreds of things happening, so below we offer a short round-up of the moving image-related highlights of the coming week.

John Smith revisits his seminal film Girl Chewing Gum with a new exhibition at Peer featuring, amongst other things, a remake (of sorts) called Man Phoning Mum. Meanwhile, Guy Sherwin has an installation of films and drawings at Siobhan Davies Studios in Elephant and Castle; and not far from there, Gasworks has a great- looking group show called All I Can See Is The Management, featuring some rarely-seen videos by the likes of Stuart Marshall and Darcy Lange amongst others. Doug Aitken has work at Victoria Miro, and afterwards you could pop next door to Parasol Unit to see Yang Fudong‘s new show. Anri Sala has both a Serpentine show and an Artangel project;  Joan Jonas shows Volcano Saga at Wilkinson; Emma Hart has an ambitious new project at Matts Gallery; Nooshin Farhid has a trilogy of videos  made at Orford Ness showing at Beaconsfield; and Stuart Croft has a new show at Bloomberg Space as part of their Comma series. And Camden Arts Centre has not one, but two intriguing new shows: one by animator Nathalie Djurberg and the other by rising British star Haroon Mirza (who has previously incorporated Guy Sherwin’s films into an installation).

Former LUX Associate Artist Cara Tolmie has a new show at Supplement. It’s the last week of a highly-acclaimed show by another former AAP Anja Kirschner, along with her collaborator David Panos, at Hollybush Gardens. Current AAP Ed Atkins is everywhere: apart from his new film commission for Frieze (alongside Lutz Bacher, Anthea Hamilton, Judith Hopf and Katarina Zdjelar), he also has an Art Now show at Tate Britain and is part of an event at Chisenhale with James Richards and Haroon Mirza on October 15th (make sure you get there early to check out Richards’ own unmissable show, which is currently in the gallery and is undoubtedly one of the shows of the year). Everyone is on tenterhooks about Duncan Campbell‘s new film, which is at Hotel’s new space in Bethnal Green. Tacita Dean has produced the new Turbine Hall exhibition at Tate Modern, which opens this week (and we’ve also had a sneak preview of the catalogue, which features contributions from a truly stellar list of people paying tribute to the ongoing importance of celluloid). And, a few hundred feet away on South Bank, there will even be a breakout video art fair called Moving Image.

As if all that wasn’t enough: the BFI is staging a programme to mark the 50th anniversary of the death of Maya Deren, one of the most important figures in experimental film, which runs until October 12th. And the London Film Festival is already up and running; the Experimenta section, which focusses on artists’ work, isn’t until the following week, but there are still plenty of highlights during Frieze like James Benning‘s new film Twenty Smokers.

And last but not least: we will be presenting the London premiere of Torsten Lauschmann‘s truly expanded cinema work, At The Heart of Everything A Row of Holes, at the Rio Cinema as a midnight movie on the 14th. And LUX’s own Gil Leung has curated her first show, called On Value, for Seventeen Gallery, which opens on the 15th.