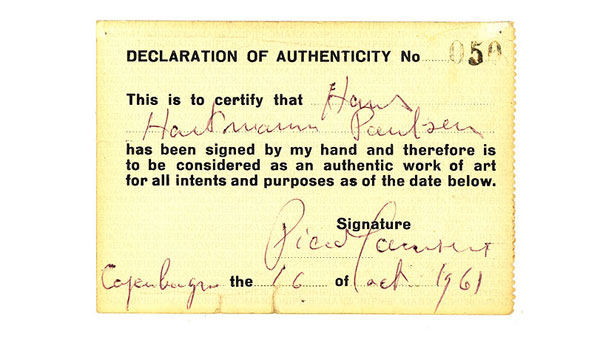 The 1960s marked the emergence not only of a widespread usage of the moving image in art, but also the regular employment of a document that is integral to the way that much artists’ film and video circulates today: the certificate of authenticity.

Though the use of agreements between artist and collector is centuries old, such documents traditionally guaranteed the work from conception to completion, specifying attributes such as subject matter, size, or materials, and also fixing a date by which the work might be delivered. The modern certificate of authenticity, by contrast, is largely concerned with what happens after the work’s completion, with ensuring its enduring connection to the moment of fabrication and to the artist. By understanding the authenticity of the work of art to reside in the performative act of certification rather than in any of the work’s inherent qualities, such certificates owe less to the old agreements between artist and patron than they do to Marcel Duchamp. In the words of Benjamin Buchloh, “Beginning with the readymade, the work of art had become the ultimate subject of a legal definition and the result of institutional validation… [T]he definition of the aesthetic becomes on the one hand a matter of linguistic convention and on the other the function of both a legal contract and an institutional discourse (a discourse of power rather than taste).” Perhaps surprisingly, Duchamp did not issue certificates authenticating his readymades or declaring them to be works of art. But after his move had been made on the chessboard of artistic intervention, the path would be open to designate anything as a work of art and secure its status as such through the act of notarization.

Such contractual agreements are crucial to the sale of film and video as limited editions on the art market. It is the certificate of authenticity, after all, that distinguishes the edition from a mere viewing copy and artificially institutes rarity where the capacity for reproducibility had been. Susan Hapgood and Cornelia Lauf’s touring exhibition In Deed: Certificates of Authenticity in Art assembles facsimiles of approximately fifty different examples of this often-unseen document. Recently on view at the Drawing Center in New York City, the exhibition provides both an introduction to the history of certification and exposure to the wide variety of forms the practice can take, ranging from the legalese of Robert Projansky and Seth Siegelaub’s The Artist’s Reserved Rights Transfer and Sale Agreement (1973) to more playful variations, such as Ruben Aubrecht’s Invoice No. 21 (Rechnung Nr. 21, 2011), which takes the form of a cash register receipt. In the accompanying catalogue, essays by the curators, SBKM/De Vleeshal director Lorenzo Benedetti, art historian Martha Buskirk, and art lawyer Daniel McClean provide historical context and theoretical elaboration of the motivations surrounding the exhibition and the quite fascinating shift in conception the certificate of authenticity has undergone throughout the second half of the twentieth century.

In the early 1960s, certificates of authenticity were employed primarily by artists who were engaged in challenging what might count as a work of art. Take, for example, Yves Klein’s Zones of Immaterial Pictorial Sensibility (1959–62). The collector would acquire an empty space (an “immaterial zone”) accompanied by a receipt/certificate of authenticity in exchange for gold. The purchaser then had two options: to keep the receipt or to burn it, at which time Klein would throw half of the gold he had received for the work in the Seine. Piero Manzoni began to produce his Declarations of Authenticity in 1961, for which the artist would sign another person and issue a certificate stating that the person is “therefore to be considered an authentic work of art for all intents and purposes.” Robert Morris’ Untitled (Statement of Aesthetic Withdrawal) (1963) reversed usual function of certification by employing a notary to help execute a document in which Morris would withdraw “all aesthetic quality and content” from a work for which the collector, architect Philip Johnson, had not paid him. In the early 1960s, then, the certificate is closely aligned with a rethinking of artistic authorship and objecthood. In the case of artists such as Manzoni, Klein, and Morris, the certificate was not simply an administrative and legal support to be hidden from public view, but an integral part of the work – in fact, sometimes its only enduring trace.

In Deed: Certificates of Authenticity in Art includes a number of contemporary examples that continue this ludic use of the certificate, such as Pierre Bismuth’s Certificate of Authenticity—Ed Ruscha (2000), a document signed by Ruscha that bears the text, “This is to certify that this is not an original work by Ed Ruscha.” In large part, however, the use of the certificate of authenticity in contemporary art – and particularly in relation to editioned film and video – is rather different and lacks such humorous subversion. Minimalism signaled an important transformation in the function of the certificate, as it ceased to participate in a satirical play on the centrality of authenticity as a criterion for judging the work of art and became instead a no-nonsense market standard. Minimalism’s removal of the artist’s signature from the artwork was part and parcel of the broader withdrawal of his or her hand in favour of the impersonality of industrial production. But rather than do away with the signature entirely, it was simply displaced onto an accompanying certificate. Here, such a document is a matter of authentication, of facilitating market exchange, and ensuring value. Such certificates are not understood to be artworks in themselves and would not tend to be displayed publicly. A graph paper certificate by Dan Flavin, included in In Deed, includes a drawing of the work in felt-tip marker but also the hand-written proviso, “This is a certificate only. It is not a drawing of mine.” And yet, as Buskirk notes in her catalogue essay, “Certifiable,” the importance of this certificate cannot be understated: if Flavin’s document is lost or destroyed, the collector would be unable to resell the work since Flavin refused to issue replacements. The collector would be left with not with an artwork, but with a pile of neon tubes. (Most artists will offer replacement certificates in the case of loss or theft.)

The certificates of minimalism established the contractual means that govern the sale of film and video today. David Claerbout has said that the certificate he provides in addition to the various technological components of his installations is “the most important thing of all. If the certificate is lost, the work itself is also lost. I therefore usually advise the buyer to above all store the certificate safely.” For both minimal art and moving image media, the certificate of authenticity has the power to transform a mass-produced industrial commodity into a work of art through a legal contract. Moreover, in both cases such documents are frequently used to prescribe guidelines for the maintenance and/or manufacture of the work after purchase and can specify terms of exhibition, refabrication, and resale. The widespread acceptance of certification as a way of reintroducing notions of authenticity and authorship was key in enabling the market valorization of works made in reproducible media. Though the employment of technologies of reproduction – whether it is photography, film, or industrial manufacturing – has thoroughly permeated artistic practice, this embrace of the multiple has not dampened what Lazlo Moholy-Nagy called in 1944 “the collector’s naïve desire for the unique.” The certificate of authenticity steps in to manage the threat of the copy. As Buskirk writes, “Clearly certificates will continue to play an important role as long as contemporary art is produced according to methods that do not present inherent evidence of production, are potentially subject to replication, or require the work to be recreated or extensively reconfigured each time it is exhibited.” As the moving image gains ground amongst the traditional mediums of artistic practice, this document will be there to subtend it, playing a crucial, but usually invisible, role.

In Deed: Certificates of Authenticity in Art will be on view at the Weatherspoon Art Museum at the University of North Carolina, Greensboro, from 12 January to 14 April 2013 and will continue on to the Contemporary Art Center, Vilnius, in Summer 2013. The exhibition catalogue, edited by Susan Hapgood and Cornelia Lauf, is published by Roma Publications. 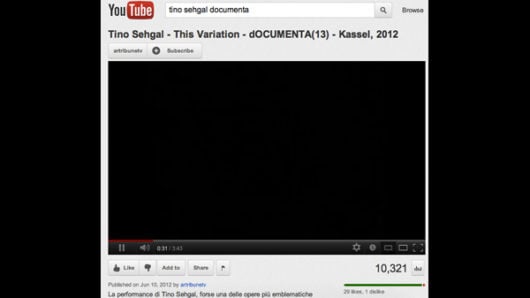 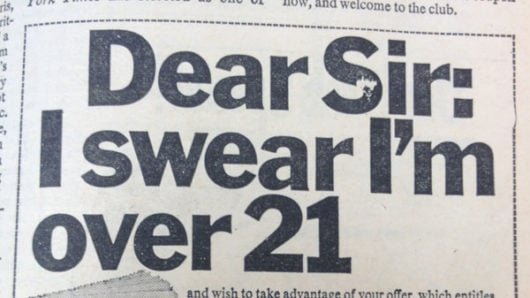 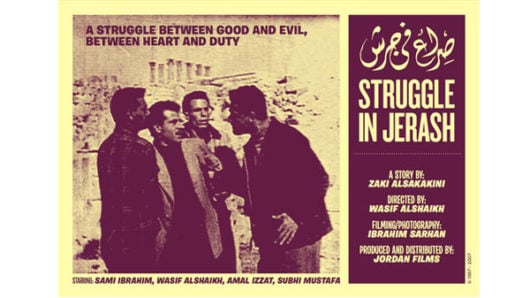