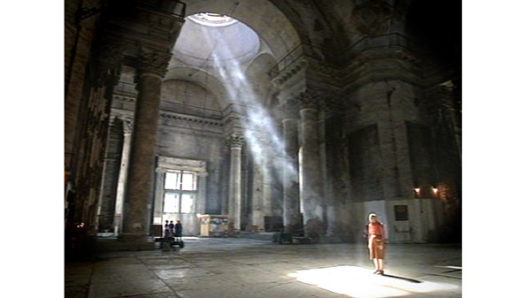 “In 1992 I went to Russia as a cinematographer to shoot two documentaries about the rise of the Orthodox Church during the demise of Communism. I found myself in Zagorsk, a holy place in Russia that epitomised this changeover of values in the Soviet federation. Onward to Leningrad (or Petrograd) as it was being renamed St Petersberg and more shooting and eventually I had gathered my own material to make a response to what I was seeing happen. The old were still in the churches, the middle-aged had left – but the young had returned. This work is intuitive and a response the spiritual transmission that was occurring between young and old. Again an early digital work accomplished whilst I was Artist in Residence at Complete Video in Soho, London” – Terry Flaxton