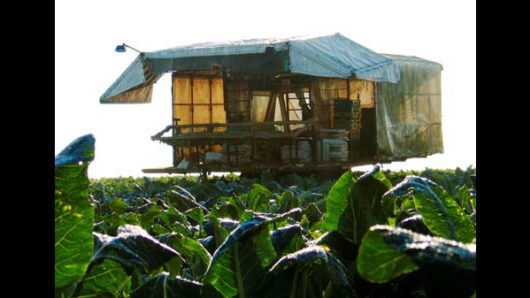 Voice-over (in Finnish, Cantonese and English):

“ It was only early summer… but all the plants were already dying,…
Time had accelerated again.
A small group of IKEA employees go to the local landfill site to try and retrieve some data they had accidentally thrown away.
Instead they found some bags of documents which recorded the history of a place where people met and showed things to each other…Distracted from their original search they took the archive to the editing station in order to look for its questions. But…something bad happened…a disagreement …well, anyway… they fell out…They split up the information in various, but particular ways, each to take it to a separate place for safe-keeping, agreeing to reunite its parts only when they themselves had resolved their differences.
One took it to the ark where everything precious had been stored…
Another chose to entrust it to strangers, offering it to the chalkpit people… And the other took it to the comparison house….And so because of ‘and yet despite all this’ the plants slowly began to recover …..and time….. stood …..still.”