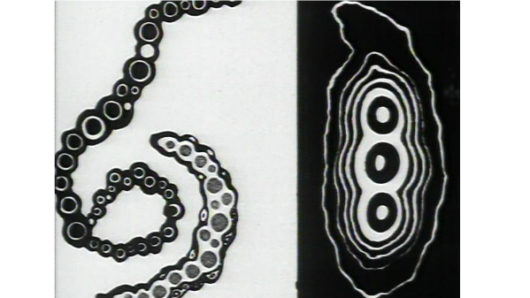 Tusalava, LEN LYE ‘s first film, is a pioneer example of experimental animation. It is a unique combination of modern art and tribal art. After its first screening in 1929, art critic Roger Fry warmly praised Tusalava for its originality and strong feeling for motion.
For two years between 1926-8, LEN LYE completed more than 9.500 drawings for this nine-minute animated film. He had interested the newly-formed London Film Society in his project, and they provided him with some money. The film was screened, once, at the Society, in 1929. Until it was screened again in 1967, Tusalava had become a forgotten part of film history.
Its title is a Samoan word, suggesting that “in the end everything is just the same”. LEN LYE conceived the film as the first of a trilogy of films about ‘the beginnings of organic life’. Because of lack of finance, parts two and three were never made. Its central motif is the witchetty grub. ‘To get the spirit of the imagery I …imagined I was myself an Australian witchetty grub who was making this animated ritual dance film.’ The whitchetty grub is the totem of a tribe near Alice Springs which considers grubs to be the ancestors of humans. The cocoon-like shape in Tusalava (which Lye has described as ‘a totem of individuality’) can be seen evolving towards human form. Meanwhile, it is menaced by a sharp tongue creature that is ‘a cross between an octopus and a spider’. LEN LYE ‘s intention was to tap the spirit of Aboriginal or Samoan art, rather than to imitate it directly. In recent years, he came to regard Tusalava as evidence for his genetic theory, as an intuitive vision of ‘antibodies and microphages.’
Len wanted to evoke creatures never seen before. The techniques of animation attracted him because of the freedom they gave him to experiment with pattern ad image. Like the German experimental film-makers, with whose pioneer attempts to create “fine art” films he respected, LEN LYE recognised artistic possibilities of the medium for conveying a sense of motion.
In contrast to the Germans’ use of geometrical abstraction or expressionism however, LEN LYE wished to draw on different aspects of modern art to convey his imagery. His interest was in finding new ways to ‘carry’ the kinetic feelings that could be discovered in the body, instead of merely imitating familiar forms of nature. He was, therefore, excited to discover tribal art, which he interpreted as the work of people very much in touch with their own bodies. Tribal dancing, which explicitly involves movement, influenced his choice of imagery.
The combination of tribal art and modern art in Tusalava is very distinctive. His primitive, organic shapes introduced a new style of animation; Tusalava remains a classic of “fine art” animation.