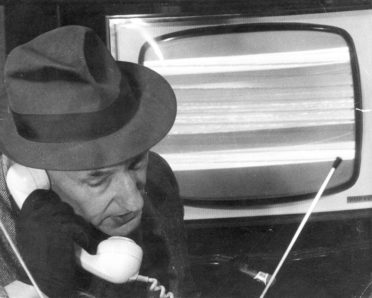 “Towers Open Fire is a straight-forward attempt to find a cinematic equivalent for William Burroughs’ writing: a collage of all the key themes and situations in the books, accompanied by a Burroughs soundtrack narration. Society crumbles as the Stock Exchange crashes, members of the Board are raygun-zapped in their own boardroom, and a commando in the orgasm attack leaps through a window and decimates a family photo collection… Meanwhile, the liberated individual acts: Balch himself masturbates (“silver arrow through the night…”), Burroughs as the junkie (his long-standing metaphor for the capitalist supply-and-demand situation) breaks on through to the hallucinatory world of Brion Gysin Dream Machines. Balch lets us stare into the Dream Machines, finding faces to match our own. “Anything that can be done chemically can be done by other means.” So the film is implicitly a challenge to its audience. But we’re playing with indefinables that we don’t really understand yet, and so Mikey Portman’s music-hall finale is interrupted by science-fiction attack from the skies, as lost boardroom reports drift through the countryside…”(Tony Rayns, “Interview with Antony Balch”, Cinema Rising No.1, April 1972)”Installations shattered – Personnel decimated – Board Books destroyed – Electronic waves of resistance sweeping through mind screens of the earth – The message of Total Resistance on short wave of the world – This is war to extermination – Shift linguals – Cut word lines – Vibrate tourists – Free doorways – Photo falling – Word falling – Break through in grey room – Calling Partisans of all nations -(Towers, open fire” William Burroughs, Nova Express, 1964)Part of SHOOT SHOOT SHOOT