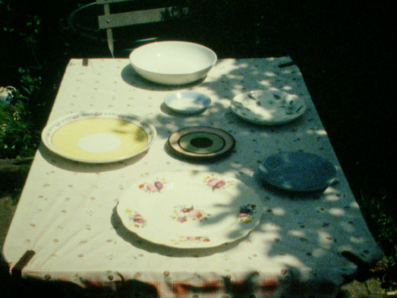 ‘A glass of water is the minimum that you can give a guest.’

A haiku sentence in itself: Peter Todd’s remark is an insight into his trio of loosely connected films. The link between them plays upon the idea of a bare-bones hospitality. It is at its most minimal in the brevity of A Glass of Water. For barely 30 seconds there is no more action than a glass half full on a table top, filmed in close up, followed by an abrupt cut to black. In Daisies Cloud Passing the close up is on grass studded with daisies, its climatic moment playing out of frame as a cloud passes across the sun, casting a shadow and deepening the light on the patch of green. The play on hospitality is most overt in Together, the longest film at barely 3 minutes. A wider view replaces the close up to encompass a garden table, chairs, jug and glasses: expectant of absent guests. Like A Glass of Water the framing of the tray of glasses on the table suggests that the intended guest may be the viewer. The careful intimacy of the framing bestows a more profound significance than is usually afforded to these rudimentary articles of everyday use. As Walter Benjamin knew, this is the gift of the camera to let the viewer see the mundane differently, with an ‘optical unconscious.’ For the camera’s gaze unlocks the complex structures within these simple objects, where the play of light across the faceted surface of the glass reveals an intricate pattern of refraction that Moholy Nagy, creator of an earlier ‘licht spiel,’ might have appreciated.

Nagy, like other ‘absolute’ film-makers, invoked music’s rhythmic structures to structure their abstractions, and the table setting in Together is part of a wider orchestration of atmospherics at play in the garden surrounding it. The camera’s own clockwork rhythm dictates a syncopation of quick and slower bursts of image – almost subliminal sometimes. Wind stirs leaves and sun flickers over red flowers and ripening tomatoes, an index of the elemental activities off screen and overhead, which, like Daisies Cloud Passing, the viewer can follow by looking down and close up. In this way, the camera is engaged in an intense scrutiny of how the wider meterological theatre above can be picked out in the incidental below.

Looking beyond their resonances with the ‘light play’ allusions of an earlier cinema, and the light-play dynamics of the table in the garden, Together and A Glass of Water are striking for the insistence of their invitation to the off screen guest. The jug and glasses on the table at the windy terrace are laid out for the viewer’s gaze rather than the arrival of a more palpable presence. The invitation may be slight, but it is profound and seriously meant.

It was vere prite. I licet. It is prite becos I lict the red floures. 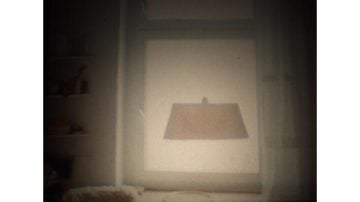