Three Films From The Room 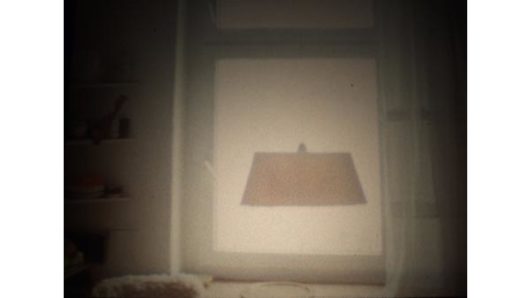 “Three Films From The Room comprises of three films which were initially inspired by a collaboration between the filmmakers Peter Todd, Luke Fowler and the musician Keith Rowe*. The Room was first used as a title for Rowe’s 2007 piece (released on CD ErstSolo 001), in part a tribute to two of his two key influences, Cornelius Cardew and Mark Rothko, and gave its name for a live performance for which Todd’s films (and Fowler’s) were originally created – extending the idea of the acoustic chamber into a filmic meditation on the movement of light and time passing within specific interiors. The three resultant films (London, Berlin and Morley College) make poetic use of the camera to evoke the passage of time across space. In the domestic environ of London, shafts of sunlight alternatively obscure and illuminate a simple still life view of a kitchen sideboard and shelves, caught in bursts of real time. Filmed over a day, the culinary tableau of plates, mugs and bowls disappear from the frame, piece by piece, in a playful tidying of the filmic space, which also recalls a child’s memory game, requiring us to remember what was once placed where. Berlin was also filmed within a kitchen interior, but rather than a fixed frame view Todd’s camera roves around the space, revealing the absent householder in an intimate focus on small details and simple kitchen objects. Morley College presents an institutional space rather than a domestic one. However, it shares the still observant focus of the other films, as it holds the image of absent activity resonant in the stacked chairs and music stands of a deserted room. This room in turn reveals its purpose as a space for music making, returning the viewer to the overall theme of this trio of films, that of experimental music and in particular the British composer Cornelius Cardew, a fellow performer of Rowe and the subject of a film by Fowler, who once taught and performed at Morley College in South London, and in this room. Thus memory resurfaces in Todd’s gentle films, where absence in an empty room is heavy with presence, as an historical vibration in the room where Cardew and the Scratch Orchestra played, in the simple objects of a friend’s kitchen and the shafts of sun and the disappearing objects of London.”Lucy Reynolds.The Room is an ongoing series of evolving collaborations. The artists work independently, then work together in each unique performance. The first installment of The Room was presented at Tate Modern on the 28th November 2008 as part of Expanded Cinema for Rothko, with 16mm films by Luke Fowler and Peter Todd, and guitar by Keith Rowe. The second installment was presented as part of the opening day of the exhibition Cornelius Cardew: The Freedom of Listening at CAC Bretigny, France on 5th April 2009. The third installment was presented at PLAY, La Casa Encendida, Madrid, Spain on the 6th March 2010. The fourth installment was presented at Netmage 11, Palazzo Re Enzo, Bologna, Italy on 22.1.2011. Three Films From The Room presents the first three films by Peter Todd in the opening order presented at Tate Modern 28th November 2008, with spacing in between, and are London, Berlin, and Morley College. Each film is printed from a single hundred foot roll of negative edited in camera.World Premiere, ‘Glow in the Dark’; Winter Garden, 14th of February 2015, Flat Time House London.