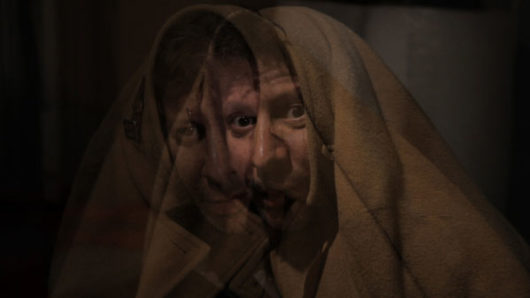 The Wanderer (The Storage) by Laure Prouvost , a newly commissioned film sequence and installation forming part of her ambitious feature-length film project The Wanderer. Comprising six narrative sequences, The Wanderer is based on script by artist Rory Macbeth who, without any knowledge of German, translated a Franz Kafka novella into English. The film follows a number of characters who undergo a series of increasingly bizarre and mysterious experiences, navigating various situations in which reality becomes increasingly uncertain.

Working for the first time with a full crew and a cast of actors, Prouvost used Macbeth’s text as a loose framework rather than a definitive script, opening up the narrative to the various shifts and slippages of language and direction introduced by filmmaking process. Where the first sequence of The Wanderer focuses on the notion of time, this second sequence focuses on the character Betty who, in a state of intoxication, delivers a rambling monologue directed alternately at peripheral characters within the film and us, the audience.