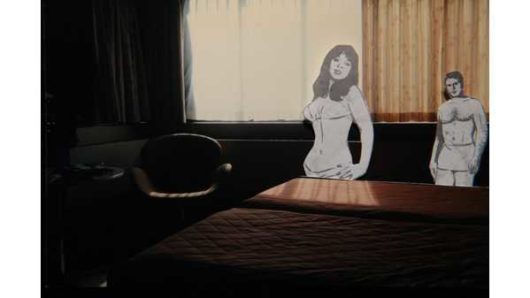 I often save collected materials for long periods of time before finding a way to use them, more often than not, my collage films use images of mid 20th-century America. The Occidental Hotel differs from past works in depicting Europe of more recent vintage. Two summer ago, I had an associational flash that the photos I shot in Berlin and Copenhagen during my 1996 honeymoon, could be fruitfully juxtaposed with Mexican comic book figures I began collecting in 1990. Although the juxtaposition of photos and drawings is stark and frictive, ultimately it gets at the way public space is inhabited and shared in centralized walking cities.– Lewis Klahr”As its title denotes, the hotel in Klahr’s movie could exist in a number of European cities. Signs in English, Danish, and German identify sites in London, Copenhagen, and Berlin. Populated by Klahr’s familiar cutouts of businessmen and seductive women, the fluid interchangeability of locations and people are less indicative of narrative import (in the manner of Klahr’s 2011 feature The Pettifogger) than they comprise a catalogue of the elements of melodrama and film noir—the Hollywood genres that bear endearingly on Klahr’s aesthetic. Hotel rooms, with Klahr’s characteristic stress on beds and bathrooms, ominous alleys and doorways, dirty tile floors, cars, traffic lights, and cigarette machines are the props and backdrops of virtual encounters and events, most of which never seem to occur. As dice—one of Klahr’s favorite motifs—repeatedly roll across these images, we’re tempted to think they suggest bad bets on clinching significant links among them, despite the recurring insertions of concerned glances or erotically charged postures. However prompted by a persistent dramatic soundtrack, any effort to correlate the greater number of repeated images to greater narrative meaning seems futile—as Klahr himself seems to wittily acknowledge when he suddenly inserts the loaded word, “then…” about two-thirds in. More likely, Klahr’s slipping his cutout men and women in and out of his frames mimic the transient behavior of people passing through big cities, frequenting hotels and restaurants, and walking the streets—subjects and objects of thousands of individual stories, imaginary and real, that remain untold. What is extraordinary is the vigor with which Klahr still invests this form.” — Tony Pipolo, Artforum Magazine 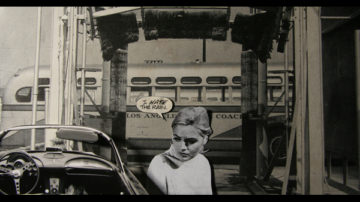