The God of Day Had Gone Down Upon Him 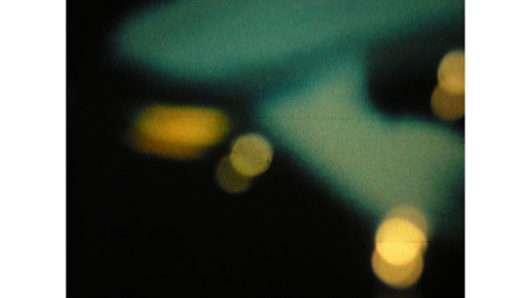 “This film of single-strand photography begins with the “fire” of reflective light on water and on the barest inferences of a ship. Throughout, the interwoven play of light and water tell the inferred “tale” of the film through rhythm, the tempo, through visible textures and forms in gradual evolution, through resultant “moods” generated by these modes of making, and, then, by the increasingly distant boat images, birds, animals, fleeting silhouettes of people and their artifacts, flotsam and jetsam of the sea-dead, as well as (near end, and almost as at a funeral) flowers in bloom, swallowed by darkness midst the crumbling of the sand castles. These nameable objects (sometimes, at first, quite enigmatic) are the frets of Symbol; but always the symbolic content is swept back into the weave of sea and light and seen, as is the merry-go-round near the beginning of the film, or the horizontally photographed fountain mimicking incoming ocean waves, to be as if spawned in the mind during oceanic contemplation. In fact, the structure of the entire film might be characterized thus: meditation on ocean is interrupted continually by rapidly cut visual frets of (at first) irritated thought; but then gradually across the course of the film these fraughts of symbols and rapidly edited constructs become a calm ‘kin to resignation, become more at-one with the diminishing light and incoming waves. The turning point of the film is near its midpoint where tall and relatively violent waves smash their cold and fearsome colors left to right across the screen, interwoven with an old man sitting in a dark blue room, followed by hints of backyard fences, grasses, distant ephemeral flowers and a hung whirling decoration. Reminders of this midpoint are accomplished through visual rhymes such as similarities of blue and a madly whirling kite against a bright sky, as well as by the (near end) entire sequence in which multiple gdfdafdasfdsaarish flowers invade the (by then) almost fully meditative sea imagery. There are visual rhymes also connecting this work with its two previous “parts” (A Child’s Garden and the Serious Sea and The Mammals of Victoria), such as an orange ball attached to a boat which “rhymes” with thrown orange balls in the previous film. As the whole film is stiched with red-orange-yellow flares (indicators of light-struck sections at beginning and ending of individual 100-foot rolls (making of the film a distinctive sequential evolution), so the end of the film has a slight flare-up (or fillip of hope?) after burgeoning dark.” – Stan Brakhage, March 1, 2000