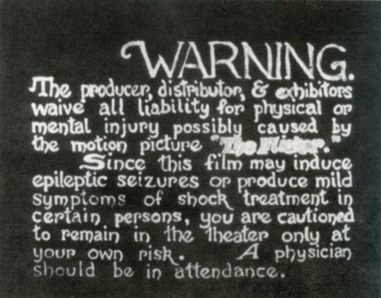 ‘The ultimate to date in the nonobjective film is Tony Conrad’s The Flicker. It has only black and white frames… and the resulting strobe effect can cause the illusion of colour, of a spreading of light, and of lacy patterns. Seeing The Flicker will cause one person in every fifteen thousand to have an epileptic seizure.’ – Sheldon Reynon, An Introduction To The American Underground Film.
‘Right from the top a warning appears on the screen. The spectator is advised that he views what is coming at his own risk. that certain ‘hypnotic’ and ‘psychotic’ symptoms may appear…the shocker from producer Tony Conrad is called The Flicker. And then it flickers endlessly. Now black, now white…’-Der Kurier, Vienna.
‘The Flicker has been called a sort of visual LSD, including hallucinations…You know a man can be called a bald faced liar simply by being an honest reporter. Some of these cats were sitting staring…as if watching and hearing Beethoven himself play his fifth piano concerto.’- The Evening Star, Washington. 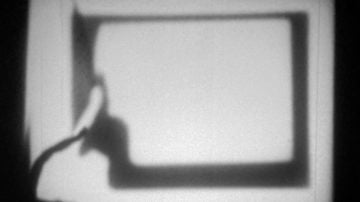