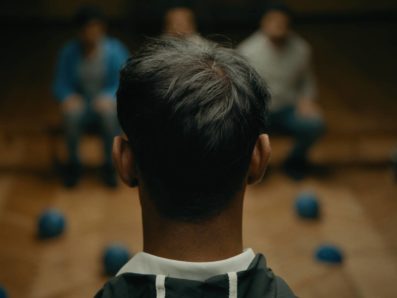 the destructors is shot on location in Tower Hamlets, east London. Reflecting on Perretta’s experience as a young man of Bangladeshi heritage, the work reconsiders the figure of alienated male youth to explore the complexities of ‘coming of age’ for young Muslim men living in the UK.The film borrows its title from Graham Greene’s 1954 short story The Destructors. Set in post-war London, still recovering from the Blitz, Greene’s story follows a gang of youths who plot to tear down an old man’s house. In an era of desolation, hopelessness and austerity, it explores a generation of young men and their perceived capacity for destruction in a society marred by inequality and material devastation. Perretta’s the destructors seeks to reflect on this narrative of post-war disaffection through the period following 9/11, a time characterised by state-sponsored Islamophobia and the perpetual ‘War on Terror’.Presented across two screens, the destructors centres on a group of young men as they navigate the social pressures of growing up in a society that has come to view them as both a physical and ideological threat. Through immersive, surround sound and staged cinematic imagery, the characters reflect on their lives and experiences through a series of monologues. Each character is captured from multiple camera angles, framed unconventionally to obscure their full identities, alluding to the institutional surveillance of British Muslims in the UK government’s anti-terror strategy.The film is shot at the Shadwell Community Centre in Tower Hamlets, east London. As a former secondary school, now functioning as a youth centre and care facility, the decaying architecture of the local authority building becomes central to the work. As the narrative unfolds, tension builds and a gradual ingress of smoke and water fills the building, drawing attention to the deterioration of public space for working-class communities of colour.Through the work, Perretta explores an uncomfortable nexus between austerity and the War on Terror, two parallel policies which have increased the economic and social marginalisation of Britain’s Muslim communities, while seeking out hope in collective experience and shared narratives. 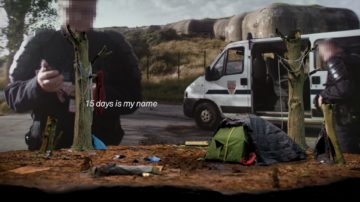