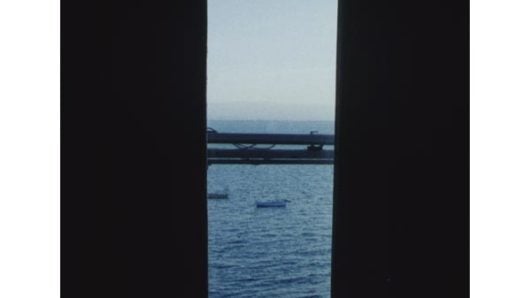 When to pick up the camera, when to look through the viewfinder, when to decide to press the button to film. Being in the moment of filming, deciding when to let go of the button, and the film to stop in the camera, waiting for the next time, for the decision or the thought to film. Thinking with the camera. Winding the clockwork spring, to be ready. And always aware of being somewhere in the timeline of the 100ft of 16mm film. Like passing through a wood, or over a lake. Aware of a film emerging. And all of life lived until this time. Intuition. Nothing can be erased; the choices made are those recorded at the time. It cannot be edited, and on reflection formed anew. Not the start of something, but complete in itself at the very moment of making. There is something humbling about working in this way. The minimum needed.Filmed in a room overlooking the sea on a 100ft roll of 16mm film negative with a handheld clockwork Bolex camera. The aperture set with light readings from a separate light meter. A single roll of film. The images in the order filmed.PT. 2014.Room Window Sea Sky. World Premiere. 58th BFI London Film Festival 19th October 2014.In competition L’Âge d’Or Prize, Brussels 2015.