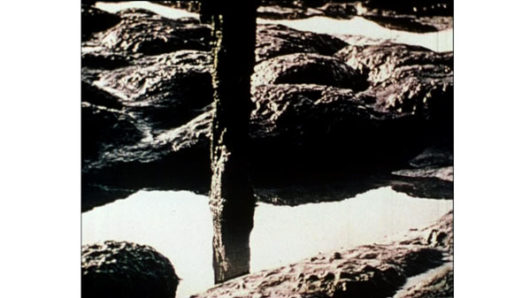 ‘she thinks she imagines – really she seesit’s all a question ofwho makes real – whose idealswhose values are valued’I am telling of geographies and explanations. She is still doing invisible work for invisible pay. Off stage and out of sight. –L.R.‘Pictures is an extraordinary and intriguing film, both in terms of the images and the sound and of its effect which is one of overflowing abundance…(with music by Lindsay Cooper and singing by Dagmar Krause) and succeeds in making real and tactile the presence of women.’ –Susan Stein, Undercut 14/15, Summer 1985‘In Pictures on Pink Paper Rhodes analyses language as a cause rather than symptom of gender inequalities by looking at the ways in which the association of women with nature and men with culture is linguistically embedded, (seen, for example, in the consistent use of female pronouns to refer to “natural” objects). This film asks how women’s oppression can be articulated without mimicking that very expression and language which defines power relations. Despite the structuring of the women’s voices the film is non-narrative – here, even time is broken down.’ –from WACK, Catalogue for ‘Art and the Feminist Revolution’, Museum of Contemporary Art, Los Angeles, 2007Selected screenings : ‘In person’, Lis Rhodes, Film Museum, Vienna, 2009 ; ‘Art and The Feminist Revolution’, Museum of Contemporary Art, Los Angeles, 2007, National Museum of Women in the Arts, Washington DC, 2008, Vancouver Art Gallery, Vancouver BC, Canada, 2009 ; Channel 4 TV, 1985 ; Berlin Film Festival, 1984