Passage Through a Ritual 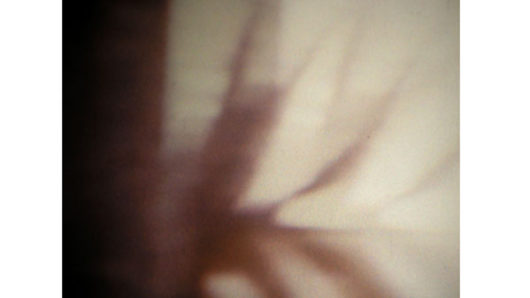 When I received the tape of Phillip Corner’s ‘Through the Mysterious Barricade, Lumen I (after F. Couperin)’ he included a note that thanked me for my film ‘The Riddle of Lumen’ he’d just seen and which had in some way inspired this music. I, in turn, was so moved by the tape he sent I immediately asked his permission to ‘set it to film’. It required the most exacting editing process ever, and in the course of that work it occurred to me that I’d originally made ‘The Riddle of Lumen’ hoping someone would make an ‘answering’ film and entertain my visual riddle in the manner of the riddling poets of yore. I most expected Hollis Frampton (because of ‘Zorn’s Lemma’) to pick up the challenge, but he never did. In some sense I think composer Corner has, and now we have this dance of riddles as music and film combine to make ‘passage’, in every sense of the word, further possible. (To be absolutely ‘true to’ the ritual of this passage, the two reels of the film should be shown on one projector, taking the normal amount of time, without rewinding reel 1 or showing the finish or start leaders of either –especially without changing the sound dials– between reels.) – S.B.