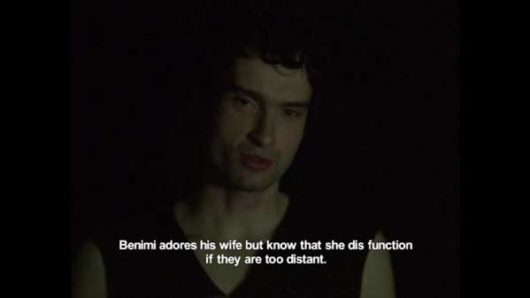 “The video is of a self-proclaimed curator of artists video works explaining what he sees as the role and function of video art, quoting Walter Benjamin along the way. His speech, though, is spliced and reworded so as to become almost incomprehensible. There are distracting jump-cuts to people in pools and farm animals, while the voiceover is humorously mis-subtitled : How can any film be an artwork, and how can any film not be an artwork? comes out as How may feeling a cow can always be in? Why he never felt like that when he kissed Madonna, even at work?”- Chris Fite-Wassilak , Frieze