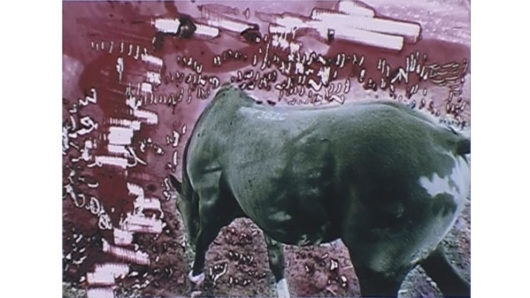 Orifso is in the form of a fable, though based upon histories of Europe, 1942 -1998, located in the picture space, on a road in France and on the streets of London. – L.R.

“Orfiso focuses on specific geographical sites as symbols of power relationships, looking at lines of demarcation. Beginning with the traces of an abandoned house the film moves to two locations : a road in France between the Occupied Zone and Vichy … in a landscape scarred by conflict…Can a landscape act as a memorial ?…and the so-called ring of steel in the City of London. A tight security ring was created around the citys commercial centre in the 1990s in response to fears of terrorism. Roads became narrowed and police lookout points were scattered around the border. One has to ask what is being protected here. It could only be the power structures of capitalist society.”– from LuxOnLine essay by Lisa La Feuvre , 2000