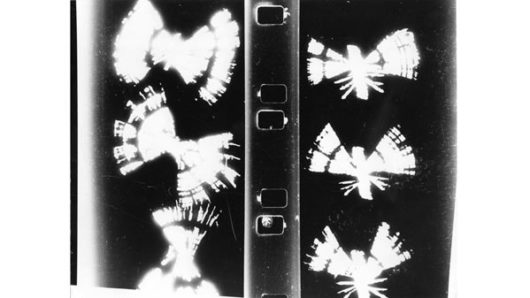 In conventional visual symbolic language, light represents good, order, truth and life. Dark represents evil, chaos and death.
The moth in the film, fighting to escape the light, is a metaphor for personal feelings which contradict this set of accepted symbolic ‘meanings’. The light bulb and the candle flame are deadly for the moth, darkness is safety and life. Often in the darkness I have been frightened of the light, frightened of being overwhelmed by the assault of visual impressions, scared of the responsibilities of the daytime, tied down by the assumption that what is ‘seen’ must be what is ‘real’, scared of hurting my eyes in the brightness if I strike a match. In the dark I feel more free to imagine, maybe altogether more free.
The ending, however, is perhaps inevitable. Everything was fine, then God said ‘Let there be light’, the interfering bastard, and nothing has been quite the same since. There seems to be no escaping it.
A moth just flew right into my face while I was typing the paragraph above, which proves that nothing under the sun is random.- V.C.
The soundtrack is an improvisation on cello, performed and recorded by Stuart Jones at the LFMC. Stuart Jones records with Kahondo Style and British Summer Time Ends on NATO label.
‘Stunning black and white animation’.-Jo Comino, ‘City Limits.’

Not Another Goddam Party 1984