To mark the release of Joshua Oppenheimer’s acclaimed new documentary The Act of Killing we are pleased to offer newly re-mastered versions of his early works for public screenings.

The Globalisation Tapes
Indonesia, 2003, 70 minutes (produced with Christine Cynn )
The Globalisation Tapes: a collaboration between the Independent Plantation Workers’ Union of Sumatra (Indonesia), the International Union of Food and Agricultural Workers (IUF ), and Vision Machine Film Project.
Sharman Sinaga’s granddaughter looks bored as her grandfather demonstrates for the camera his favored technique of market liberalisation : holding union activists upside down in flooded fields. He mimics their gargles as they choke in the mud. He could hold down two or three at a time he boasts; he seems faintly nostalgic in the dim light and the smoke; his only regret, that his arms and knees aren’t what they used to be.The orders to hold people upside-down came from the top, he tells us, from Surhato ; they came also with support from high on Capitol Hill. The Globalisation Tapes were made in collaboration with those a little further down the pile, closer to the mud (and the rubber and the oil), closer to the memories of the massacre that cleared the way for Indonesia’s ‘modernisation ‘. Using their own forbidden history as a case study, the Indonesian filmmakers trace the development of contemporary globalisation from its roots in colonialism to the present. Through chilling first-hand accounts, hilarious improvised interventions, collective debate and archival collage, The Globalisation Tapes exposes the devastating role of militarism and repression in building the ‘global economy’, and explores the relationships between trade, third-world debt, and international institutions like the IMF and the World Trade Organization. The film is a densely lyrical and incisive account of how these institutions shape and enforce the corporate world order (and its ‘systems of chaos’).

‘Seemingly inexorably, the corporate pillage of the planet continues apace but so, thankfully, does the protest, not least amongst Indonesia’s export plantations, the focus of this extraordinary DV document devised, written and produced collectively by the seriously-informed members of the Independent union, Perbbuni . The film deploys Godardian text graphics, reappropriation of Western commercials, role-play, and interviews to analyse the devastating impact of neo-liberal economics on millions. In Indonesia’s case, this has unfolded against the legacy of Suharto’s genocidal US-backed dictatorship (an on-screen interview with a former death squad member is revelatory in its depiction of mundane evil). Marking a major leap forward in activist image-making, the film is a truly radical, always accessible, and often beautiful call to think globally but act locally.’ Time Out, 2004

The Entire History of the Louisiana Purchase
USA, 1998, 56 minutes
The Entire History of the Louisiana Purchase combines documentary, collage, and fiction to tell the story of a woman who thinks she’s had an immaculate conception and murders her infant in a microwave oven. This fictional story unfolds through documentary interviews with denizens of the apocalyptic fringes of American society: a self-proclaimed antichrist and his loving mother, a Christian fundamentalist UFOlogist , militia leaders, and the inventor of the microwave oven. The interviews locate a fictional story as an inevitable part of the American landscape — if it hasn’t happened, it should have. Gradually, the film leaves interview behind to transform Mary Anne Ward’s extraordinary case into a sweeping and schizophrenic history of the American west, an archeology of America’s home-grown and starry eyed sense of omnipotence, and a diary of one woman’s attempt to find meaning and history amid the nuclear age’s apocalyptic amnesia.

‘The Entire History of the Louisiana Purchase is an imaginative and innovative film essay which combines faux and real documentary with lyrical fiction to paint a monstrous yet beautiful portrait of America at the end of the millennium. With unflinching originality, the film meditates humorously on faith, myth, scapegoats, the idea of the alien, the end of the world, and the beginnings of redemption. The film is a playful intellectual travelogue through the abandoned remnants of the Wild West, an ex-frontier turned into a heartland deprived of its promises, gazing at the stars for signposts to a brighter future. The film reminds us that the West may share something more than barbed wire with genocide, and that history can be told through the moving image in startling new ways. Oppenheimer suggests that we may look to cinema to understand the dark secrets at the heart of the American dream. Oppenheimer asks: if we can identify with larger-than-life epics on the silver screen, why can’t we see the larger-than-life history of the United States in the fringe acts of violence (motivated by the most irrational fantasies) which this country nurtures more than any other on our planet? … Oppenheimer interviews an extravagant selection of individuals, alumni from the pages of The National Enquirer. A story of infanticide and fanaticism unfolds through interviews the inventor of the microwave, UFOlogists , and militia leaders — we even hear from the Antichrist while his mother prepares rice in the kitchen of a Vegas trailer home. Every detail fits perfectly into si-non-e-vero-e-ben-trovato of imminent doom. As in Buñuel’s dogless Andalusian Dog, there is no textbook history and no Louisiana in The Entire History of the Louisiana Purchase. Examining hallucinatory stories told by religious and political eccentrics, he shows how they, broken existentially and orphaned by a corporation-state and its laissez-faire praxis, use their closed minds as a last shelter, as their Andalusian doghouses. … Oppenheimer’s monstrous yet charming ‘history of my country’ is written by a poet, sweet and dark, joyous as the wet rats who save themselves from drowning in the film’s last sequence. And the film never loses sight of the rats’ wealthy cousin, that most famous mouse from the West Coast. The Entire History of the Louisiana Purchase is a pioneering and innovative work. It opens a genre of film as revelatory and intelligent dream, stimulant of social memory, and means for re-examining the relationship between fact and fiction, historical truth and social myth.’ Dusan Makavejev , Director of WR : Mysteries of the Organism
Winner of a Gold Hugo at the Chicago International Film Festival 1998

These Places We’ve Learned to Call Home
USA, 1996, 30 min
Oppenheimer slips into the militia groups of the American heartland passing himself off as an alien abductee . By infiltrating militia groups and telling the story of a fellow UFO passenger who was impregnated by the aliens, Oppenheimer immediately gained the trust of the militia members. They figured that “no one from the federal government would infiltrate as an alien abductee ‘ The film juxtaposes images of chaos, destruction and cruelty with snippets of conversations with members of militias and white supremacist groups, plus sequences of performance art, to create an evocative, unsettling work of contemporary Americana.
Winner of the Gold Spire Award, San Francisco Film Festival, 1997

Joshua Oppenheimer (b. USA 1974) was educated at Harvard and Central St. Martin’s, London. His award-winning films include The Act of Killing (2012), The Globalisation Tapes (2003, co-directed with Christine Cynn ) and The Entire History of the Louisiana Purchase (1998). Based in Copenhagen and London, Oppenheimer is artistic director of the Centre for Documentary and Experimental Film at the University of Westminster, and has published widely on the themes of political violence and the public imagination. 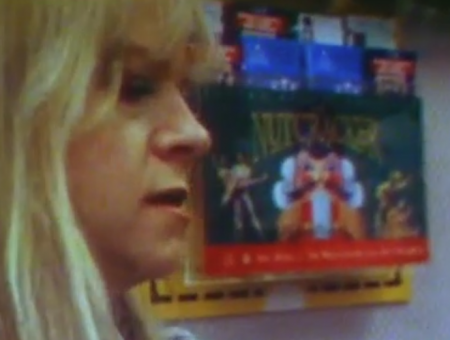 The Entire History of The Louisiana Purchase