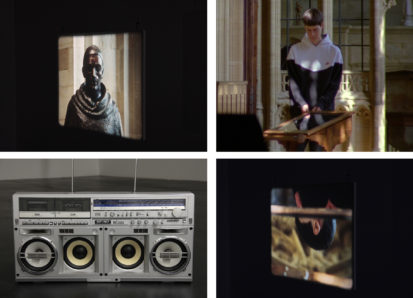 Handclap/Punchhole is the first of a trilogy that includes the subsequent works :-* (2012) and Percussion Biface 1-13 (2012). This piece references two historical optical devices: Sherborne Abbey’s mirror-trolley which enables visitors to view the vaulted medieval ceiling without straining their necks, and Tony Conrad’s seminal 1965 minimalist film The Flicker which is composed of alternating black and white frames. Prodger appropriates The Flicker’s black and white frames to set up an ‘architecture’ for her film, like columns punctuating a space. Woven between these intervals we see an androgynous figure using the mirror-trolly to survey the Abbey’s soaring ceiling. By juxtaposing the ornate spectacle of Sherborne Abbey’s ceiling with the ‘anti-image’ polemic of structuralist film, Prodger contrasts the Reformation’s stripping away of excessive ornamentation with the seemingly subjectless surface of minimalism. Much in the same way that The Flicker deconstructed moving image into its constituent frames, the mirror device only allows for the whole to be known through an examination of parts. Prodger’s treatment of the body, often fragmented or half-obscured, likewise mirrors this movement between part and whole, yet also extends it to one between desire and restraint.

Handclap/Punchhole takes its name from two technical actions used in the film industry to synch recorded sound with celluloid. Conversely, Prodger displaces of sound and image here – to the point where they play out in inverse relation to the other: image is only present when sound is not, and vice versa. The installation includes a spoken word audio tape playing on a Sharp GF 767. Considered the holy grail of boomboxes, it was designed in 1982 to drown out all other boomboxes on the street. Here, it is competing with the mechanical clatter of silent images traveling through the film projector. While the film documents a small intervention – a queer countercultural body in an historical environment which has been repositioned into a mainstream tourist attraction – the tape on the boombox plays a collection of cross-pollinating oral histories describing the increasing obsolescence of analogue cinema simultaneously with the obliteration of gay cruising spaces: queer subjectivity brushing up against the limits of reproductive technology. 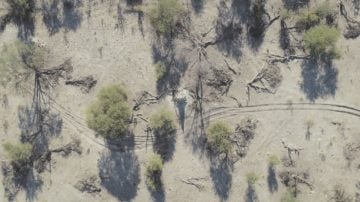 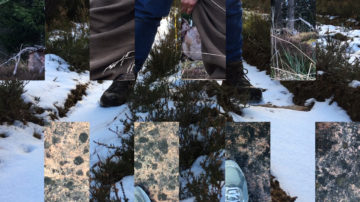 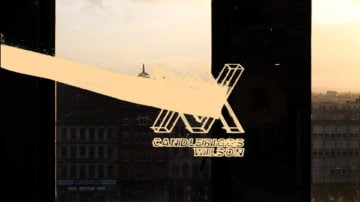 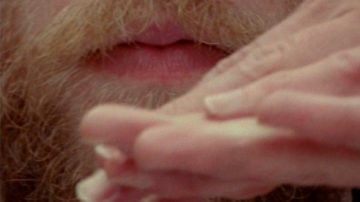