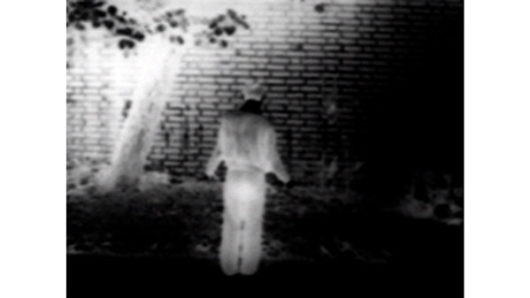 “Footsteps is in the manner of a game reinacted, the game in making was between the camera and actor, the actor and cameraman, and one hundred feet of film. The film became expanded into positive and negative to change balances within it; black for perspective, then black to shadow the screen and make paradoxes with the idea of acting, and the act of seeing the screen. The music sets a mood then turns a space, remembers the positive then silences the flatness of the negative. I am interested in the relationship of theatrical devices in film working at tangents with its abstract visual qualities. The use of a game works the memory, anticipation is set, positive film stands to resemble a three-dimensional sense of time in past/future. Then negative holds out film itself as the image is one stage further abstracted and a disquiet is set up in the point that the sound track ends, whilst the picture track continues.” – Marilyn Halford, Perspectives on British Avant-Garde Film exhibition catalogue, 1977)

Moving Studies in Black and White 1978