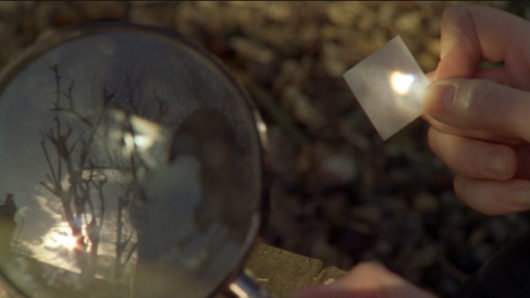 ‘Fire’ was made for an event at the ICA programmed by Lucy Reynolds about experiments in sound, film and performance to accompany the exhibition ‘The sun went in, the fire went out: landscapes in film, performance and text’, curated by Karen Di Franco and Elisa Kay at Chelsea Space. The film responds to Annabel Nicolson’s performative explorations of light and fire as well as the title of the exhibition. ‘The sun went in, the fire went out’ is a line of text taken from a notebook of the archaeologist and writer Jacquetta Hawkes, author of ‘A Land’ (1951), a poetic history of the British Isles through its geology. In the film two woman experiment with various arduous methods to ignite a fire. The film combines negative and positive film image and can be screened with live sound.