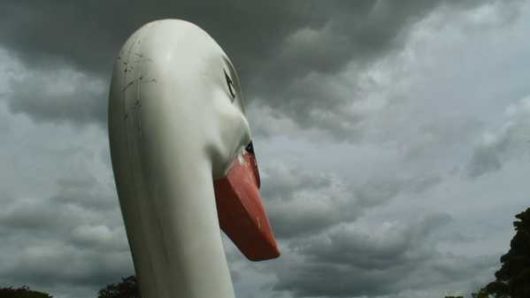 Fib is the Pictish name for the Scottish region The Kingdom of Fife, a ‘fib’ is also another term for a ‘white lie’. Shot in Fife the film unfolds over the course of a day and features 2 young people, a male and a female, who are undertaking an indeterminate census taking* activity. The precise nature of their actions; why they are going door to door asking questions, who they are and exactly when (in the present, past or future) these actives are taking place is intentionally ambiguous. The viewer is deliberately not informed of the names of the 2 characters – their ID cards are opaque mirrors – and so aspects of their appearance such as their hair or the logos on their branded t-shirts become stand-ins for their individual identity. Taking place in 3 main locations; a park, the doorways and streets of a small town and the caves and shoreline of a waterway, the film contains minimal dialogue in the form of specific questions and responses as well as the lyrics of a portion of a song which is overlaid at the end of the film. The film is driven by the repetition of certain imagery (single eyes, a swan boat and a swan match box, a stone lion and a puma bag, the ticks of the clipboard paper and the Nike ‘swoosh’) and actions (the re-positioning of stones in the caves alcoves and the ticking of the boxes on the clipboard paper) which emphasise the relationship between what can be referred to as ‘culture’ and ‘nature’. Intermittently the narrative flow of the film is punctuated by brief segments of music and repeated extended footage of a tree with knot on its bark which appears as a stylised eye. In ‘Fib’ the privileged position of writing within our own culture is questioned in a manner invoking anthropologist Claude Lévi-Strauss’ observation that ‘the fight against literacy is therefore connected with an increase in governmental authority over the citizens.’ (Claude Lévi-Strauss, Tristes Tropics, 1955). The action of census taking, resulting objects, information and actions which the census functions through, are portrayed as ‘factish’ things and deeds that enable ‘practices to pass into action without the practitioner ever believing in the difference between construction and reality, immanence and transcendence’ (Bruno Latour On the modern cult of the factish Gods, 2011) and reflect Cunningham’s ongoing interest in ideas of progress as articulated by the overlapping of residual and emerging aspects within culture and technology.* Census taking appears to date back to Babylonian times (4000 BC) and is seen as being an activity practiced by civilized cultures. Throughout history, ancient and modern, it has been a problematic and contentious undertaking especially in colonial/post-colonial countries, during times of war and political change. ‘Fib’ was co-commissioned by LUX and Collective Gallery’