The original film Europa was made by Stefan and Franciska Themerson in Poland 1931 and was a visual interpretation of Anatol Stern’s 1929 poem Europa. The film was lost during the second world war and has never been recovered. This tape-slide reconstruction of Europa was made in 1983-84 by the Distribution Staff of the London Film Maker’s Co-Operative with Stefan and Franciszka Themerson using surviving stills from the film and a voice-over by John Claus. In 1973 the Themersons made the following reconstruction of the script:

— Leaves in the wind (photogram with motion of leaves made by moving the light source, negative and positive).

— Photomontage panorama (series of our photomontages penetrated and transfixed by light etc., among these one of sky-scrapers being cut along the top by scissors, frame by frame and turned in reverse).

— (Eligiusz — a model from the Academy, close-up frame by frame following the length of his body, from the head down to the boots, — the camera on a painting easel being let down frame by frame).

— A study of eating (the model: a chap met on the street who turned out to be a butcher), head eating, gobbling a steak (head level with the screen), mouth, menu inscribed EUROPA (from the Hotel Europejski ), multiple image of a head eating slices of apple (eight) exposures on the same film, S.T. eating frame by frame, ‘self-portrait’),transmission belt carrying apple slices.

— Crumpled newspapers being stuffed into a mouth.

— Head and a microphone.

— Drawing by George Grosz (in the place of a heart: an animated motor frame by frame — this short was eliminated by the censors as they took the drawing to be a portrait of Prystor ).

— Photomontage panorama from the cover of ‘Europa ‘ by Teresa Å »arnower ) and others.

Two figures (moulded from bread by a pair of inmates of the mental hospital in TwÃ³rki ), a devil and a man in a straight jacket (the latter has a head that swivels; nods frame after frame).

— These shots interposed with a cut to: a helmeted soldier in the trenches throwing a grenade, a third cut to: barbed wire.

— Hand against a cross, a nail.

—Photogram of a heart beating (white on black).

— Sidewalk, sidewalk slabs close-up on crack, blade of grass grows into a tree.

— Photogram of a stomach.

— Photogram of a heart beating (as before, filling the screen).

— Against the heart (insert) tiny woman jumping from a diving board into the water (in the middle of the screen).

‘The film faithfully passed on the motif of Stern’s poem; a vision of Europe gone mad, blindly racing towards its own destruction. Changes in the tempo of narration and astonishing contrasts were introduced by using the single frame technique, eliminating certain phases of motion, intensive editing, condensed cuts, multiple images and repetition.’ 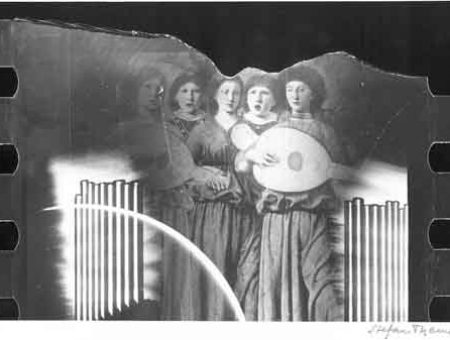 The Eye and the Ear 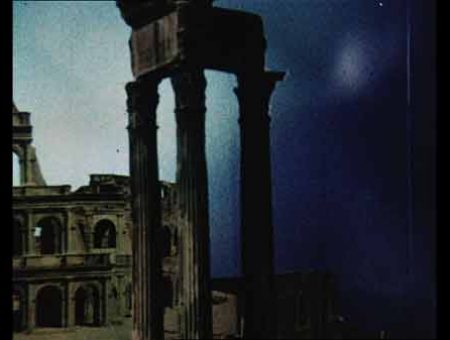 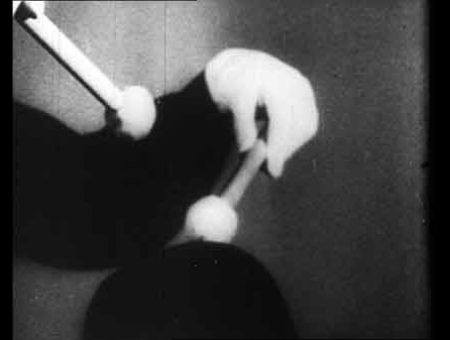 Adventures of a Good Citizen 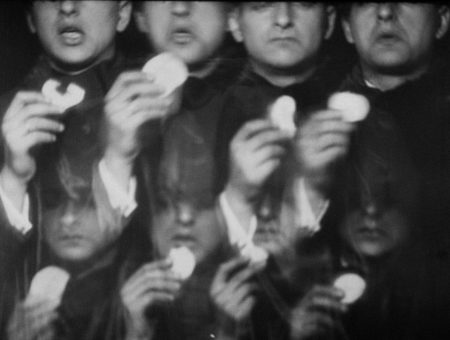