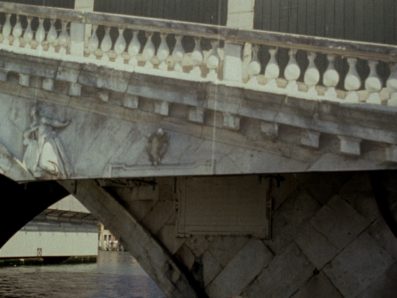 In ‘CANWEYE { }’, the image of the film set, between states of construction and deconstruction, becomes the main narrative character in a meta-fiction, shot on 16mm film on Canvey Island, Essex and in Venice, Italy. Here, the estuary and the lagoon are locations for an ambitious proposal towards a facsimile city, where parallel architectural and geological sites signify another kind of set.

The work stems from research around ‘Plague Street’ (1971), a drawing by Derek Jarman and possible set design for Ken Russell’s ‘The Devils’ (1971). Jarman later captured ‘The Devils’ on Super-8 from the screen at the Elgin Cinema, New York, reconfiguring the footage for ‘The Devils at the Elgin’ (1974), which concludes in a “blizzard of ashes”, presenting the set as he had originally envisaged. This ghost adaptation becomes an invisible score for ‘CANWEYE { }’, that also comprises material orbiting another film, as its own unmade epic.

‘CANWEYE { }’ was first shown at Focal Point Gallery in a three-part structure that recalled a sound-recording booth, with glass viewing panel into the space of the projection. It was installed alongside Jarman’s ‘Plague Street’, a fly-poster series ‘TELEPATH’, and film trailer ‘INCIPIT’, that presents three musicians in the process of recording the film score, composed by Leo Chadburn. 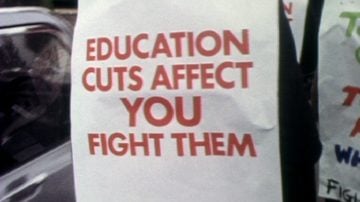