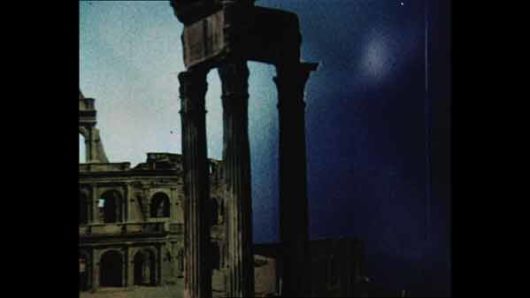 ‘In 1938 Stefan and Franciszka Themerson , leading figures in Polish avant-garde cinema, left Warsaw for Paris. In 1942 they came to England and worked for the rest of the war in the Film Unit of the Polish Ministry of Information and Documentation in London. Calling Mr Smith, made in 1943, calls on ‘Mr Smith’ to support the war effort as an anti-fascist struggle, illustrating its appeal with examples of Nazi oppression in Poland.
‘The film is experimental in technique, using anamorphic lenses, still and moving images and vivid colour (the Dufay-colour process). While the spoken soundtrack employs a rhetoric heard elsewhere in wartime propaganda, the overall tone of the film is unusually urgent and authentic and in some sequences images combine with music (Chopin, Szymanowski ) to convey a real feeling of loss.’ — David Finch.

Adventures of a Good Citizen 1937