Images gathered by Bob Fleischner, sound-film composed by Ken Jacobs.
Jack says I made the film too heavy. It was his and Bob’s intention to create a light monster-movie comedy. Two comedies, actually two separate stories that were being shot simultaneously until they had a falling out over who should pay for the raw stock destroyed in a fire when Jack’s cat knocked over a candle, Jack claimed it was an act of God. In the winter of ’59 blue Bob showed me the footage. Having no idea of the original story plans I was able to view the material, not as exquisite fragments of failure, of two failures, but as the makings of a new entity. Bob gave over the footage to me, and with it the freedom to develop it as I saw fit.
I think it was in late 1960 that Jack and I ignored our personal animosities for long enough to record his words and songs for the soundtrack. The phrases he repeated into the tape recorder were all ones I’d at some time heard him say, most were pet phrases he loved to recite, over and over, his lessons.
I played him selections from my 78 collection, music from the 20’s and 30’s, some-times only the beginning of a record and if he liked it would restart the record and immediately record. I don’t think there was a second take of anything. Miracles of improvisation issued forth and any lack of clarity in his delivery is due to the very second rate equipment, third rate, fourth rate, we were using. I play the harp for the Madame Nescience monologue. Jack supplied the Arabic music.
A small amount of my own previous shooting was cut into the film, the short “drowning in nescience” colour sequence near the beginning.
Blonde Cobra is an erratic narrative – no, not really a narrative, it’s only stretched out in time for convenience of delivery. It’s a look in on exploding life, on a man of imagination suffering pre-fashionable lower East Side deprivation and consumed with American 1950’s, 40’s, 30’s disgust. Silly, self pitying, guilt strictured and yet triumphing – on one level – over the situation with style, because he’s unapologetically gifted, has a genius for courage, knows that a state of indignity can serve to show his character in sharpest relief. He carries on, states his presence for what it is. Does all he can to draw out our condemnation, testing our love for limits enticing us into an absurd moral posture the better to dismiss us with a regal “screw off”. – K.J.

We See Absence (part one of Circling Zero) 2002 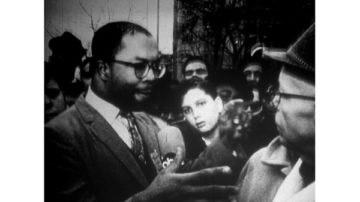 Excerpts From the Russian Revolution aka Globe 1973 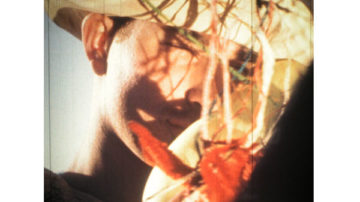