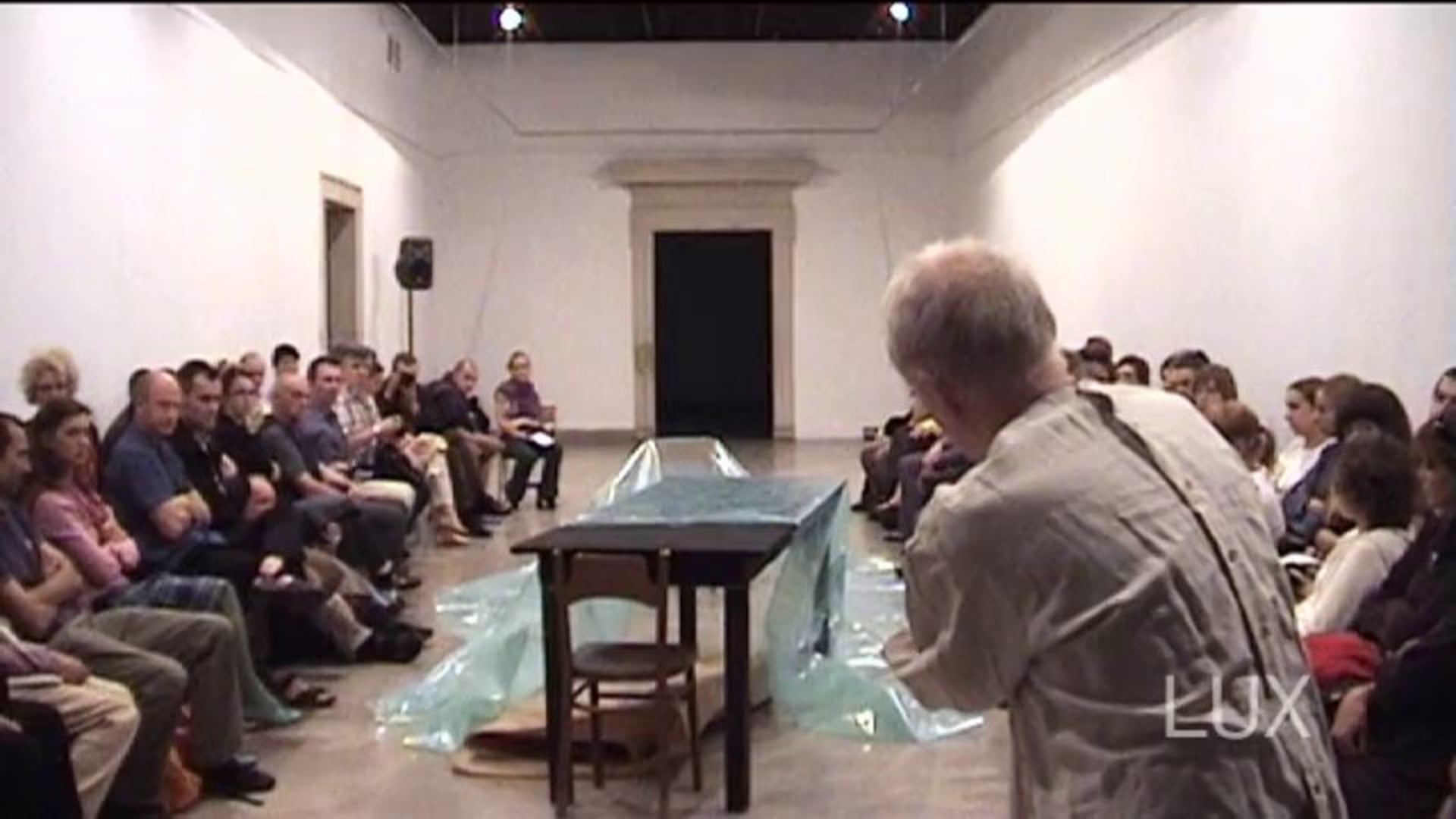 I came across Barbara Suckfull `s word drawings in a catalogue… And was impressed by the visual qualities of the drawing made visible through the elegant script. When I read the translation of one or two of the texts I was intrigued by the seemingly mild difficulties she recorded. However the discourtesies she mentioned I would imagine become relatively intense when experienced in incarceration. Her invocation of the red headed nurse in relation to the devil would possibly reflect the agricultural culture she knew as a farmer`s wife where the spirit world had a fluctuating presence beneath Chtistian belief. She was hospitalised for a long time, the last known reference to her being in 1934. The text drawing and separate text I used are dated 1910. This led to a speculation as to whether she died naturally or was the subject of the State`s application of euthanasia in 1934. I was invited to make a performance in European Performance Art Festival, at the Centre for Contemporary Art, Ujadowski Castle, Warsaw 13 Sept 2006 and chose to make Barbara Suckfull the subject of the work. I have made a number of performances in Poland since 1975 and have some experience of the country, and there are other factors which drew me to Poland stemming from childhood during World War two and its aftermath. I made a performance which used found sound sources ( discovered during the performance eg chair sounds ) as a means of expressing a parallel expression to her written text. I used the idea stemming from jazz where instruments are played to produce sounds which invoke to some extent the human voice. In the performance, as well as the actual text spoken in Englisn and polish, female and male voices are heard. The spoken text is not that in the drawing shown, but from another Suckfull work. There was also a sound tape running through the performance giving it a slow rhythm. You will hear the sound of rain , some ambulance sounds and noises of amplified tin cans and broom sweeping punctuating the performance. The video is not a documentation of the performance, but is another work in which added features open the performance out. There is of course a loss in the lack of live performance when seen in reproduction, but there is an advantage in video where the intention of the work can be revisited and made anew with the addition of audio visual material, having the fluidity of not being imprisoned in real time. It is this conjunction between live performance and the reconsideration of a given performance in the medium of video which makes for an awkward condition which would seem to be in keeping with the conflation of a living person being severely restricted in life and then further constrained in hospital, by accident a dreadful stroke of fate. It complements what the subject is. The last phrase of the text in the video is written solely in Polish. In English it translates as `the industrialisation of death`.