A Plan for A Spell 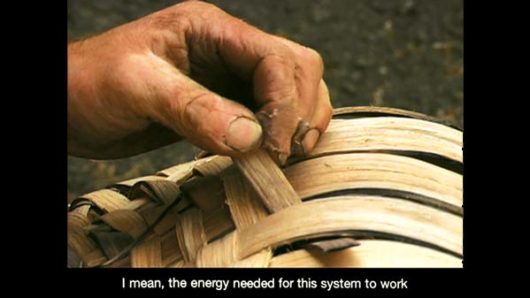 “Plan for a Spell” 2001 shows a series social spaces (some are real, some are possibilities) from the contemporary British landscape that in a certain configuration create the formula for a spell. The spell is to experience clarity.

Many of these ingredients are folk events (e.g . Uppies and Downies , Ottery St Mary Tar Barreling) where communities assemble to create play within chaos. Other constituents of “Plan for a Spell” show other forms of engagement: coincidences, movements (of a weaver’s hands, and the blades of wind turbines), foot and mouth pyres, journeys from within a computer game, and a demolition derby… All these spaces vacillate between disorder and order.

Together, if played out in the right sequence they will configure the spell. The DVD is encoded to randomly assemble the sound, vision and subtitles, so every time it is played it will play differently, incessantly evolving the narrative. If left on infinitely it may never play all the possible configurations and may never trigger the spell…or it may release it in the first few minutes. It is random; It is impossible to predict what it will play next.

A voice-over via subtitles witnesses the configurations unfolding,…sometimes apparently within the work itself. At others, apparently watching it, with the viewer. 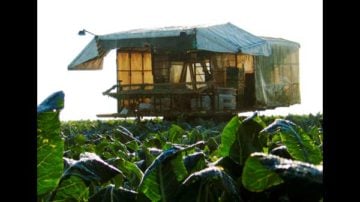