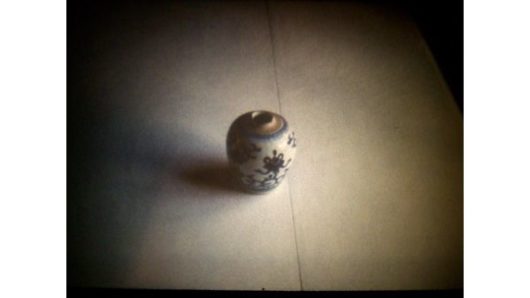 An old ceramic jar from my parent’s house. Images of places its presence brings. A study of object and place.’An emotion was there, rather than an idea. A way of being with an object.A film which begins and ends with similar images; experience, rather than resolution.A ceramic jar I remember from my parent’s house. Now in their nineties, they have been shedding objects for some time. It came from my mother’s family, so quite soon, there is an image of a landscape near Rotterdam. About object, and place.Most of the ‘sequences’ or ‘sections’ are filmic intuitive ‘thoughts’, sometimes just a pairing of images. Some edited in camera, some edited later. And there are a few pauses; dark no image time. Words define and circumscribe, images open and go outwards. An image reverberates in different ways to words; non verbal, physical.There is just the film.’PT. 2015. (with thanks to SC)NOW. World Premiere. 59th BFI London Film Festival 15th October 2015.